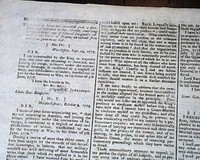 On the charges against General Burgoyne... British brutality in New Jersey...


THE LONDON EVENING POST, England, Nov. 9, 1779  Over half of page 2 is taken u with correspondences between the British Secretary of War and General Burgoyne concerning the charges against the latter: "...that your not returning to America and joining the troops, prisoners under the convention of Saratoga, is considered as a neglect of duty and disobedience of orders...".
The back ... See More 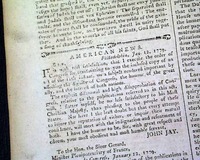 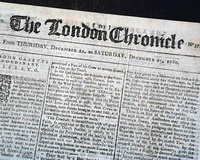 
THE LONDON CHRONICLE, England, December 23, 1780   Page 2 has various items on the Revolutionary War including a report from Charleston which notes: "...last accounts from Lord Cornwallis inform us that he was with the army in North Carolina, that the people submit to him in great number & that he meets with no opposition in his march...of the most notorious rebels in South Caro... See More