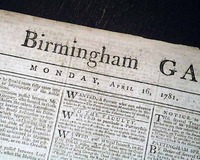 
ARIS'S BIRMINGHAM GAZETTE, England, April 16, 1781  Page 2 has mention of the noted John Paul Jones, with: "Paul Jones arrived at Philadelphia the first of March with only a single frigate. It is said he brought some very important news which had not transpired..." and further on is a note from St. Eustatia: "The Americans that fled to the woods & attempted to make a st... See More