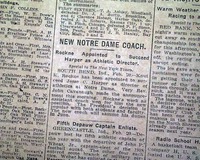 
NEW YORK TIMES, February 21, 1918  Here is a terrific report for any Notre Dame fan. A small one column headlines near the bottom of page 12 announces: "NEW NOTRE DAME COACH" "Rockne Appointed to Succeed Harper as Athletic Director" which tells of the hiring of Knute Rockne as the new coach for the Fighting Irish. Rockne would put Notre Dame on the map as a football powerh... See More 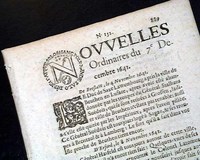 
NOUVELLES, Paris, France, December 7, 1641  The heading roughly translates to: "Ordinary News"." This issue predates the earliest English language newspaper we have in our inventory. It was the "sister" publication of the "Gazette", the very first regular newspaper published in France, started in 1631 by Théophraste Renaudot but with influential backi... See More 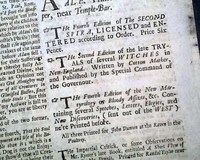 The back page has an advertisement for the book "The Second Edition of the late TRYALS of several WITCHES in New-England. Written by Cotton Mather, and Published by the Special Command of the Governour." (see)
This is the only periodical we have ever ... See More 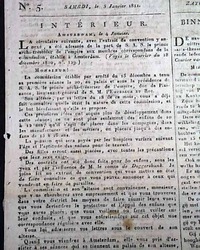 This was a daily newspaper published in Amsterdam during the French occupation of Holland. It is bilingual: half printed in French and half in Dutch. Two mastheads as well, one in each language.
In 1810 Napoleon Bonaparte annexed Holland to his empi... See More 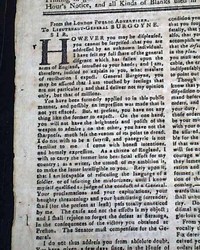 Almost the entire front page is taken up with a letter: "To Lieutenant-General Burgoyne" taken from a London newspaper and reprinted here.
Not surprisingly the theme is critical of Burgoyne, who is best remembered as the commanding general at S... See More 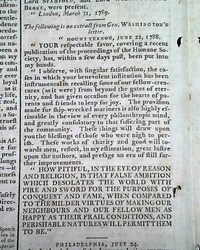 Considered by many as the most significant newspaper of the 18th century, particularly during this, the formative year of the new federal government, as the Gazette was the mouthpiece of all matters political. Most pronouncements from Congress & the President were printed first in this newspaper.
... See More 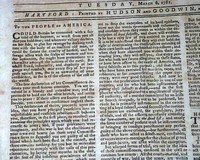 Most of the front page is taken up with an impassioned plea: "To The People of America". The focus is on the recent conciliatory declaration by England towards a peace, but this write warns to not be deceived. A few... See More