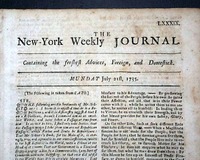 This is the very rare & early newspaper printed by John Peter Zenger who, just 8 months earlier was arrested for the critical comments he made in his newspaper about a decision made by the British Governor of New York, William Cosby. The result was a famous libel case in which Zenger was acquitte... See More 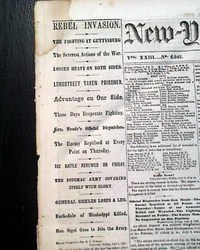 Terrific issue on the Battle of Gettysburg...

The top portion of the first column on the front page is taken up with some great & very historic heads on the Battle of Gettysburg, including: "REBEL INVASION" "The Fighting At Gettysburg" "The Severest... See More 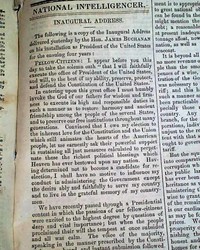 Inauguration & inaugural ceremonies of President Buchanan, in a Washington newspaper...

A terrific issue in which to find the inauguration and inaugural address of President James Buchanan. Almost the entirety of the first two columns on page 3 are taken up with the: "Inaugural Address". If is preface... See More