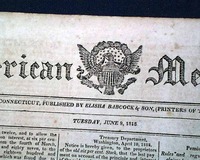 The front page has five Acts and three declarations each signed in type: James Monroe. Other news of the day with several interesting advertisements. Some staining in one of the declarations, some foxing spots, otherwise in nice condition.
... See More 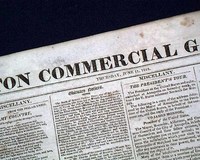 Other news of the day with several advertisements. Some lite foxing, but none in this content, otherwise in ... See More 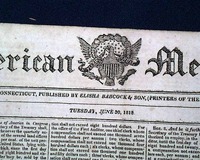 On the front page under a small woodcut of an eagle and shield are five separate Acts plus three notices for the sale of public lands, each signed in type: James Monroe. Another act and notice on pg. 4 are also signed in type by Monroe. Other news of the day inclu
... See More