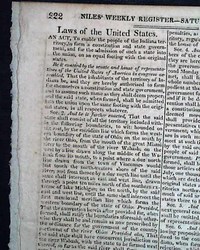 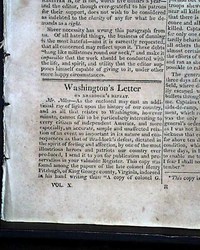 
NILES' WEEKLY REGISTER, Baltimore, June 15, 1816  An inside page has half a column headed: "Colonel Boone" which tells of a visit to Fort Osage, Missouri Territory, by Daniel Boone, including in part: "We have been honored by a visit from col. Boone, the first settler of Kentucky...He has established a colony or settlement...on the Missouri...The colonel cannot live wi... See More 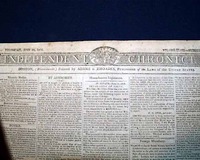 A page 3 report from Columbus, (Ohio) says: Sailed from...Delaware County, the Adventure of Little Walnut...bound for Missouri. The Adventure is [a] seventy five feet keel and 16 tons burthen. It was built on Little Walnut one mile from its mouth.... Loaded princi
... See More 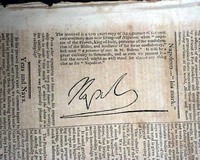 Napoleon's signature on the front page...


NILES' WEEKLY REGISTER, Baltimore, June 22, 1816  Perhaps the best content in this issue is the very unusual front page item headed: "Napoleon--'his mark' " which includes a facsimile of his signature, with a bit of text (vertical) which begins: "The annexed is a very exact copy of the signature of the most extraordinary man now living..." with a bit more.... See More 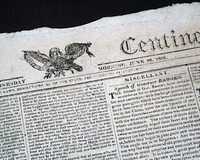 Among the "Deaths" on page 2 is one that reads, in part: "In New York State, Col. William S. Smith, a brave and intelligent officer of the revolutionary war....an independent Member of Congress....He was son-in-law of President Adams; but was bereaved of his excellent consort se... See More