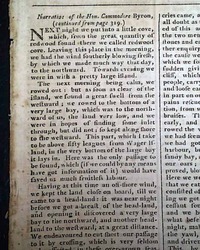 The first half of the newspaper is taken up with the continuation of the "Narrative of the Hon. Commodore Byron" on his expedition around the world in the 1740's.
Near the back are reports from London noting in part: "...that most of the readers of our paper are such ... See More