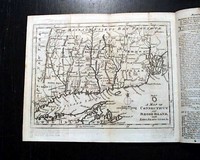 Offered is an original, historic, & collectible old newspaper: GENTLEMAN'S MAGAZINE, London, November, 1776Â  * Capture of New York City * Rare Connecticut & Rhode Island map * American Revolutionary War This issue begins with "Proceedings in the HouseÂ  of Commons..." which includes discussion on the Revolutionary War, including: "...Nothing could have afforded me so much satisfaction as to have been able to inform you...that the troubles which have so long distracted my colonies in North America were at an end; and that my unhappy people, recovered from their delusion, had delivered themselves from the oppression of their leaders, & returned to their duty; but so daring & desperate is the spirit of those leaders...that they have now openly renounced all allegiance to the crown & a... See More