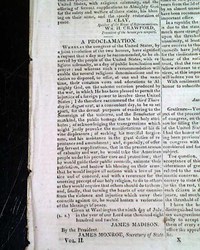 Offered is an original, historic, & collectible old newspaper: THE WEEKLY REGISTER, Baltimore, July 18, 1812Â  * President James Madison proclamation * Day of fasting and prayer The front page features: "A Proclamation" by the president for "...a day of public humiliation and prayer...to offer, at one and the same time, their common vows, and adorations to Almighty God...of seeking his merciful forgiveness, and his assistance... that in the present season of calamity and war...care and protection...hasten a restoration of the blessings of peace."Â  This is signed in type: JAMES MADISON. Also within are: "Law of the United States" beginning: "To prohibit American vessels from proceeding to, or trading with, the enemies of the United States..."; "North-Carolina" which is a call to ar... See More 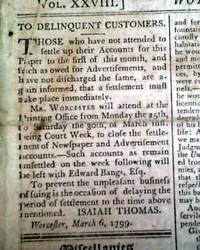 Offered is an original, historic, & collectible old newspaper: THOMAS'S MASSACHUSETTS SPY OR WORCESTER GAZETTE, March 13, 1799Â  * 18th century American title The front page has an appeal: "To Delinquent Customers" signed in type by the famed publisher: Isaiah Thomas. Also: "A Proclamation" for a day of fasting, humiliation & prayer, by the governor. And also an "...Answer of the President to the General Assembly of Maryland..." signed in type: John Adams. Four pages, some foxing, small rubbing hole to the front leaf, good condition. 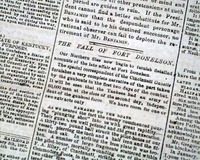 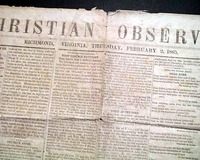 Offered is an original, historic, & collectible old newspaper: CHRISTIAN OBSERVER, Richmond, Virginia, Feb. 2, 1865 * Jefferson David proclamation * Confederate Day of Thanksgiving Has mostly religious-related content on the ftpg. save for a war item: "First Virginia Artillery" "Stray Leaves from a Soldier's Artillery". On the reverse under "General Intelligence" are various news reports from the war. Also has: "Prison Life At Elmira, N.Y." being a Confederate soldier's account about his experience in a "Yankee military prison". And fittingly enough (relative to the title) there is also a "Proclamation By The President" scheduling a day of "Humiliation and Prayer, with Thanksgiving", signed in type: Jefferson Davis. Presumably complete as a single sheet which is what most Confe... See More 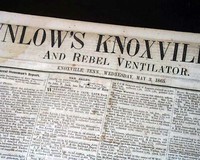 Offered is an original, historic, & collectible old newspaper: BROWNLOW’S KNOXVILLE WHIG, AND REBEL VENTILATOR, Tennessee, May 3, 1865 * Very rare Civil War title - closing events * William Gannaway "Parson" Brownlow W. G. Brownlow, or Parson Brownlow, was a fascinating personality to say the least. He regarded anyone who disagreed with him about religion or politics as an enemy. The circuit-riding Methodist parson turned to the press to spread his harsh anti-Presbyterian, anti-Calvinist rhetoric, and to spread his fervently held views on the inferiority of blacks & his unalterable opposition to secession. In 1861 Brownlow’s criticism of the Confederacy led the government to shut down his newspapers for 2 years. In December, 1861, Brownlow was arrested on a charge of h... See More