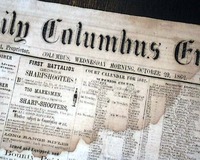 Offered is an original, historic, & collectible old newspaper: DAILY COLUMBUS ENQUIRER, Georgia, Oct. 29, 1862 * Very rare Confederate title * General Braxton Bragg Certainly one of the less common Confederate titles from the Civil War. Columbus is in Southwest Georgia on the Alabama border very near Montgomery. Among the various items inside are: "The Yankee Draft" "Progress & Events of the War" "Columbus Guards & Columbus Volunteers" "Confederate States Senator" "Affairs in Tennessee--Bragg Ordered to Richmond" "Gen. John H. Morgan Hangs the Federal Provost Marshal of Lexington" "From Bragg's Army" and more. Most of the back page is taken up with the: "Constitution of the State of Georgia, Ratified July 2, 1861". Four pages, even toning, various damp staining, otherwise goo... See More 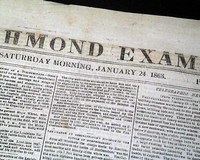 Offered is an original, historic, & collectible old newspaper: DAILY RICHMOND EXAMINER, Virginia, January 24, 1863 * From the capital of the Confederacy Not only a nice Confederate newspaper, but one from the capital of the Confederacy. The front page includes: "The Intercepted Correspondence", "Notes Of The War--Affairs at Vicksburg--The Several Attempts of the Enemy Against the City--A Renewed Attack Expected--The Spirit of Our Army" "City Intelligence" "The Charge of Breckinridge's Division in the Battle of Murfreesboro" "The Situation In Middle Tennessee" "Telegraphic News--Movements Of Morgan's Men--Reports From Kentucky" and a few more smaller items including a dispatch signed in type by: Braxton Bragg. The back page is mostly taken up with the editorial which has as a focu... See More 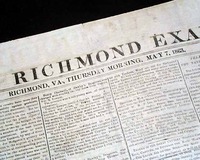 Offered is an original, historic, & collectible old newspaper: DAILY RICHMOND EXAMINER, Virginia, May 7, 1863 * Battle of Chancellorsville, Virginia * A "rebel" victory * Rare Confederate title Not only is this a nice newspaper from the Confederacy, but it is from the Confederate capital. A nice front page account of the Battle of Chancellorsville, a major Southern victory. the top of the first column has: "From Fredericksburg" taking most of the column & including: "...The enemy finding himself outflanked deserted his works without resistance & fled towards Chancellorsville...During Saturday Jackson continued to press the enemy's right, whilst General Lee assailed him in front..." with much more (see). This is followed by: "The Last of The Great Yankee Raid" with subheads: ... See More 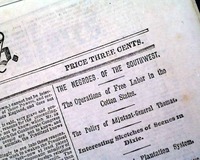 Offered is an original, historic, & collectible old newspaper: NEW YORK TIMES, Nov. 28, 1863 * Chattanooga Campaign - Tennessee * Braxton Bragg vs. Ulysses S. Grant Among the front page heads on the Civil War are: "Additional From The South" "Speculations & Facts from Chattanooga" "How Affairs Looked Before the Battle" "Bragg's Responsibilities Admitted" "Progress of the Siege of Charleston" "The Negroes Of The Southwest" "The Operations of Free Labor in the Cotton States" "Interesting Sketches of Scenes in Dixie" and more. Plus, this issue has the "Supplement" as well with its own masthead and stack of headlines, even more than found on the front page (see). Complete in 12 pages, very nice condition. 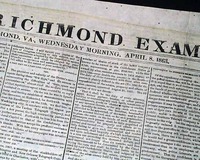 Offered is an original, historic, & collectible old newspaper: DAILY RICHMOND EXAMINER, Virginia, April 8, 1863 * Southern telegraph A famous newspaper from the capital of the Confederacy. Most of the front page is taken up with various reports on: "The Southern Telegraph". Also on the ftpg. is a dispatch to General Robert E. Lee signed in type: Braxton Bragg which concerns the telegraph as well. The back page has a nearly column long editorial concerning the Civil War, beginning: "These are the last days of the longest truce in the war...In another week the ground will...be dry enough for military transport & manoeuvre...before May day will have already reddened the whole field..." with more (see photos). Also: "Very Latest From the North--Important from Europe--Complete Success... See More 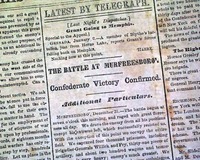 Shown is an original & historic old newspaper, offered to enhance your collectible interest: THE MEMPHIS DAILY APPEAL, Jackson, Mississippi, January 3, 1863 * Battle of Stones River - Murfreesboro, Tennessee * Jefferson Davis proclamation * Very rare title This newspaper had fascinating history as it was chased around the South--see the information below. The most notable content in the issue is the back page report headed: "The Battle At Murfreesboro" "Confederate Victory Confirmed" "Additional Particulars" which includes a report signed in type by: Braxton Bragg (see). Also on the back page are: "From Vicksburg" "The Future At Vicksburg" "Death of Col. James L. Autry" "Letter From Grenada" "River Warfare" "Proclamation By The President" takes almost an entire column and is si... See More 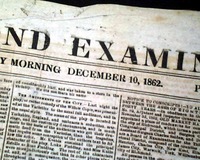 Shown is an original & historic old newspaper, offered to enhance your collectible interest: DAILY RICHMOND EXAMINER, Virginia, Dec. 10, 1862 * Rare Confederate title from the rebel capital * General Braxton Bragg letter A nice newspaper not only from the Confederacy, but from its capital, through which all war-related news would flow. The front page includes: "The Spoils Gathered In Kentucky" "Confederate States Prison Items" "The Prices of army Cloths" "Progress of the Abolitionists" "Capture of Gunboats" and more. The back page has a lengthy editorial, as well as reports headed: "The Interest Felt in England in the American War" "the North Has Been Carrying on this War for Nearly Two Years--and What is The Result?" "An English Opinion of Butler's Rule in Orleans" "The Grow... See More 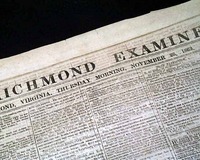 Shown is an original & historic old newspaper, offered to enhance your collectible interest: DAILY RICHMOND EXAMINER, Richmond, Virginia, November 26, 1863 * Battle of Lookout Mountain - Braxton Bragg * From the capital of the Confederacy A very nice newspaper from the capital of the Confederate states. The front page has some advertisements but is dominated by various news reports, including items headed: "The News" "The Courts" "City Intelligence" "Battle at Lookout Mountain" which is a short dispatched signed in type by: Braxton Bragg (see images), followed by yet another brief dispatch signed by him as well (see images). Also: "Affairs At Chattanooga" "Capture of Yankees by Mosby" "From Charleston" and other smaller items. The back page has much news reporting as well as the... See More