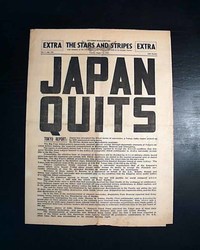 Offered is an original, historic, & collectible old newspaper: THE STARS AND STRIPES--EXTRA, Southern France Edition, Aug. 14, 1945Â  * Terrific issue for display * Best publication to be had Of the several editions of this newspaper--and there were many published at various locations in Europe & elsewhere--this is one of just two which reported the end of World War II on the 14th (other was the Paris edition). The other editions carried the report on August 15. And this edition did it in much more dramatic fashion than the others as well, with half of the front page taken up in large, bold letters: "JAPAN QUITS" with broadside-like reporting of the event beneath it, beginning: "Japan has accepted the Allied terms of surrender...". Four pages never bound nor trimmed, nice conditio... See More 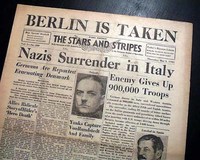 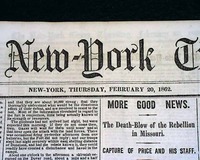 Offered is an original, historic, & collectible old newspaper: THE NEW YORK TIMES, February 20, 1862 * Clarksville, Tennessee * Fort Donelson This issue includes the following front page headlines: "THE FORT DONELSON VICTORY", "Upward of Six Thousand of the Prisoners Arrived at Cairo", "How the Prisoners Will Be Disposed Of", "Evacuation Of Clarksville", "THE REBELLION BREAKING UP", "The Death-Blow of the Rebellion in Missouri", "The Stars and Stripes Flying in Arkansas" and more (see images). This 8 page rag issue is in nice condition. 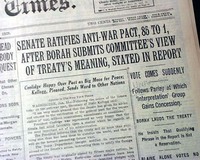 Shown is an original & historic old newspaper, offered to enhance your collectible interest: THE NEW YORK TIMES, January 16, 1929 * Kellogg-Briand Pact - Pact of Paris * Frank B. Kellogg & Aristide Briand * Richard E. Byrd's first flight over Antarctica The front page has a three column headline: "SENATE RATIFIES ANTI-WAR PACT, 85 TO 1, AFTER BORAH SUBMITS COMMITTEE'S VIEW OF TREATY'S MEANING, STATED IN REPORT" with many subheads. The full text of the pact is located on page 2. Always nice to have notable events in history reported in this World famous publication. Also on the front page is a one column headline "Byrd Lands Plane For First flight Over Antarctica" with subhead "Might Cheer Bursts from Crew as the 'Stars and Stripes' is Safely Put Ashore" and a... See More