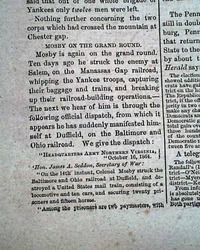 Offered is an original, historic, & collectible old newspaper: DAILY DISPATCH, Richmond, Virginia, Oct. 18, 1864Â  * John S. Mosby - Guerrilla leader * 43rd Battalion, Virginia Cavalry * From the capital of the Confederacy This newspaper from the capital of the Confederacy has much reporting on the Civil War, but perhaps the most significant is a front page account with heads: "Mosby On the Grand Round" which begins: "Mosby is again on the grand round..." and includes a dispatch signed in type by: R. E. Lee noting: "On the 14th instant Colonel Mosby struck the Baltimore and Ohio railroad at Duffield & destroyed a U.S. mail train consisting of a locomotive and 10 cars & securing 20 prisoners and 15 horses. Among the prisoners are 2 paymasters with $168,000 in government funds." Fu... See More 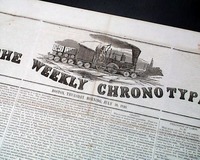 Offered is an original, historic, & collectible old newspaper: THE WEEKLY CHRONOTYPE, Boston, July 30, 1846Â  * Uncommon title See the great, early engraving of a railroad train in the masthead. An interesting array of news tidbits of the day. Four pages, nice condition. This is the vol. 1 number 10 issue of a title which lasted about 4 years. 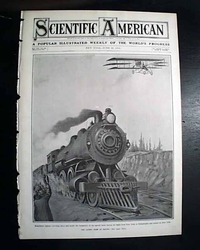 Offered is an original, historic, & collectible old newspaper: SCIENTIFIC AMERICAN, New York, June 25, 1910Â  * Aviator Charles K. Hamilton * "crazy man of the air" In an age when the railroad was transportation king, and the airplane was the next great transportation adventure, the front page could not be better. The full pg. is taken up with a print captioned: "Hamilton's biplane traveling above & beside the locomotive of the special train during his flight from New York to Philadelphia and return on June 13th. "The Latest Form of Racing." Charles Hamilton was a notable daredevil flyer at the time (see hyperlink). The event featured in this issue is mentioned in Wikipedia. Inside has 3 more photos and text headed: "Hamilton's Round-Trip Aeroplane Flight from New York to Philade... See More 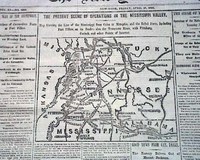 Offered is an original, historic, & collectible old newspaper: NEW YORK TIMES, April 18, 1862Â  * Memphis TN Tennessee * Battle of Shiloh (Pittsburg Landing) * Jews - Jewish - Judaica The front page features a nice, detailed map headed: "THE PRESENT SCENE OF OPERATIONS IN THE MISSISSIPPI VALLEY. Map showing the Line of the Mississippi from Cairo to Memphis & the Rebel Forts, Including Fort Pillow...". There are also nice column heads including: "The War In The Southwest" "Operations of Commodore Foote at Fort Pillow" "Good News From Gen. Banks" "The Enemy Driven Out of Mount Jackson" "Capture of Locomotives & Rolling Stock" "Rebels Reported to be in Force at Rude's Hill" "The Siege Of Yorktown" "A Wholesale Dread of Our Sharpshooters" and more.Â  Page four under "Shiloh" has: "... See More 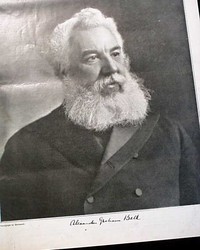 Offered is an original, historic, & collectible old newspaper: SCIENTIFIC AMERICAN, New York, May 2, 1903 * Alexander Graham Bell cover photo (nice for display) The full front cover of the issue features a photo of "Alexander Graham Bell" which also features his signature below it along with an accompanying article inside. Within the issue is: "The Stanley Airship"; "Powerful English Locomotive for Suburban Traffic"; "Ore Finding by Electricity"; "Condition of the Work on the Rapid Transit Subway (New York)"; "The Latest Atlantic Line, 'Kaiser Wilhelm II'"; and other articles and advertisements. Complete issue in 16 pages, tabloid size, very light staining, nice condition. 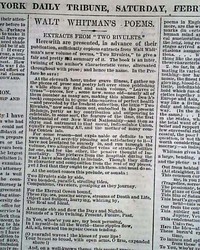 Shown is an original & historic old newspaper, offered to enhance your collectible interest: NEW YORK TRIBUNE, February 19, 1876 * Pre-publication extracts of "Two Rivulets" - 1st appearance * Much on and by Walt Whitman * 1st major works since "Leaves of Grass" Page 4, under the heading, "WALT WHITMAN'S POEMS," has per-publication extracts from "Two Rivulets," and are believed to be their 1st appearance. Included are "Eidolons," "Freedom," and "To A Locomotive In Winter," with additional Whitman thoughts on his writing and on the Centennial. See images for details. Other news of the day is found throughout. Complete in 12 pages, in very good condition. 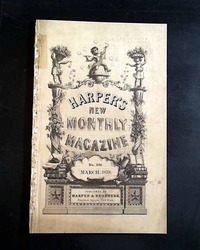