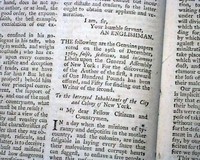 Offered is an original, historic, & collectible old newspaper: THE LONDON MAGAZINE, England, February, 1770 * Ill treatment of New Yorkers by British Parliament * Pre-American Revolutionary War tensions Perhaps the most interesting feature is the full title/contents page which has a very intricately engraved view of the skyline of London at the time, making this very decorative. Of great interest are 2 1/2 pages with a letter: "To the Betrayed Inhabitants of the City & Colony of New York" which is terrific reading on the harsh treatment of the colonists by the British Parliament. It begins: "In a day when the minions of Tyranny & Despotism in the Mother Country & the Colonies are indefatigable in laying every snare that their malevolent & corrupt hears can suggest to enslave a ... See More 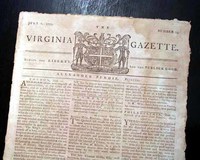 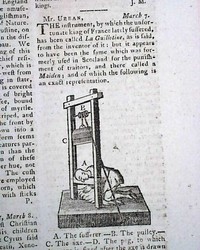 Offered is an original, historic, & collectible old newspaper: THE GENTLEMAN'S MAGAZINE, London, March, 1793 * King Louis XVI of France execution w/ print (historic) This issue contains the: "Minutes of the Proceedings of the National Convention of France" which takes 4 pages with considerable detail on the trial of Louis XVI with a subhead: "The Final Judgment of Louis XVI" which has text which includes: "...Is Louis guilty?...I hereby declare that the National Convention has found Louis Capet guilty of a conspiracy against the liberty of the Nation, and the safety of the state..." with much talk on what they should do with him including the votes of various individuals (see). Ultimately they report: "...I vote for Death! Ah! could we but as easily dispose of all Tyrants!...the pre... See More 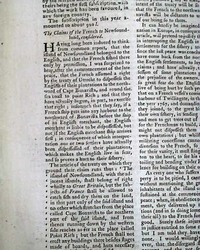 Shown is an original & historic old newspaper, offered to enhance your collectible interest: THE GENTLEMAN'S MAGAZINE, London, May, 1768 * Sir Francis Bernard, 1st Baronet The prime feature is: "A Letter from the Earl of Shelburne to his Excellency Governor Barnard" of Massachusetts, which is followed by a piece prefaced with: "The General Assembly of Massachusetts Bay having treated the above letter with great freedom, Governor Bernard put an end to the Session with the following speech..." (see). Further on is: "An Address to the People. Friends & Countrymen, well-wishers to the Glorious Cause of Liberty". Among additional articles are: "The Claims of the French to Newfoundland, Considered" "An Account of the American Armadilla" which includes a nice full page plate of what we ... See More 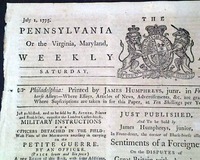