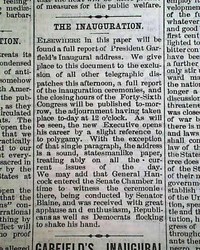 Offered is an original, historic, & collectible old newspaper: THE DESERET NEWS, Salt Lake City, Utah (Territory), March 9, 1881Â  * James A. Garfield inauguration * Inaugural address - uncommon title Page 8 has: "The Inauguration" with some details of it, followed by: "Garfield's Inaugural Address" which carries over to take more than half of page 9.Â  Tragically, he would be assassinated less than 4 months later. Complete in 16 pages, never bound nor trimmed so it folds out to one large sheet, some dirtiness at the margins, very nice condition. 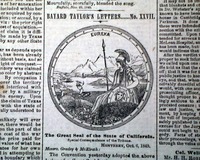 Offered is an original, historic, & collectible old newspaper: NEW YORK WEEKLY TRIBUNE, Dec. 22, 1849Â  * State of Deseret Constitution * Mormons - Mormonism - Utah * Great Seal of California adopted The front page has an article which includes a very nice engraving captioned: "The Great Seal of the State of California" and a related article which begins: "The Convention yesterday adopted the above design of a Great Seal for the new state of California. The credit of its invention is mainly due to Major R. S. Garnett of the Army..." with more text. Save for a very very minor alterations this is the same seal used by California today, and their website notes its various portions: "Under the gaze of Minerva, the Roman goddess of wisdom, a miner works near the Sacramento River. A gr... See More 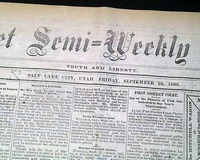 Offered is an original, historic, & collectible old newspaper: DESERET SEMI-WEEKLY NEWS, Salt Lake City, Utah, Sept. 26, 1890 * 1890 Manifesto - Mormonism & polygamy * Church of Jesus Christ of Latter-day Saints * Best publication to be had ? - very rare This newspaper contains one of the more noteworthy events in Mormon history, that being the printing of the "1890 Manifesto", a statement which officially ceased the practice of plural marriage in The Church of Jesus Christ of Latter-day Saints. Signed by church president Wilford Woodruff in September, 1890, the Manifesto was a dramatic turning point in the history of the Mormons. The Manifesto prohibited church members from entering into any marriage prohibited by the law of the land, but did not require the dissolution of exis... See More 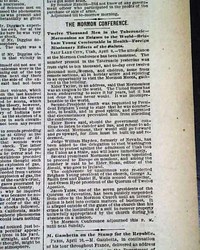 Offered is an original, historic, & collectible old newspaper: THE WORLD, New York, April 11, 1872Â  * State of Deseret - Mormons - Mormonism * The Church of Jesus Christ of Latter-day Saints The front page has a report from Salt Lake City on: "The Mormon Conference" with subheads: "12,000 Men in the Tabernacle--Mormonism and Enigma to the World--Brigham Young Comfortable in Health--Foreign Missionary Efforts of the Saints". Page 4 has: "The State of Deseret" which is an editorial concerning the newly created Constitution for the proposed state of Deseret (now Utah). The editorial is quite critical of the Mormons. Page 5 has: "Colored Men's National Convention" at New Orleans, with a few detail. The photo shows the brief article. Eight pages, very nice condition. 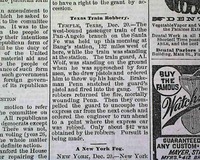 Shown is an original & historic old newspaper, offered to enhance your collectible interest: DESERET EVENING NEWS, Salt Lake City, Utah Territory, December 21, 1889 * Old West train robbery The front page has: "Texas Train Robbery" with the detail, including: "...was approached by four men who drew pistols and ordered him to throw up his hands..." with more (see photos). Four pages, never bound nor trimmed, light dirtiness & foxing to the top half of the front page only.