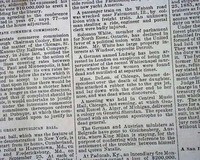 Offered is an original, historic, & collectible old newspaper: THE SAN DIEGO UNION, California, Sept. 20, 1888Â  * Charles Ludwig is Jack the Ripper ? The front page has a brief & inconspicuous item on Jack the Ripper: "A German named Ludwig has been arrested in London on suspicion of being the perpetrator of the recent Whitechapel murders, where the four women were found dead and mutilated at separate times." Eight pages, a small repaired piece on the back leaf, ftpg. news agent's stamp, minor fold foxing. 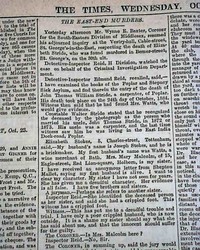 Offered is an original, historic, & collectible old newspaper: THE TIMES, London, England, October 24, 1888Â  * Jack the Ripper Whitechapel murders * Elizabeth Stride murder investigation * Best title to be had (very rare as such) "Jack the Ripper" reports were common in the latter half of 1888, capturing the interest of people on both sides of the Atlantic as evidenced by the reports in many newspapers in the United States. But issues of THE TIMES from London are the most sought after, being primary source reports in this internationally famous title. Page 3 has over 1 1/2 columns devoted to: "The East-End Murders" with the article beginning: "Yesterday afternoon Mr. Wynne E. Baxter, Coroner for the South-Eastern Division of Middlesex, resumed his adjourned inquiry...respecting ... See More 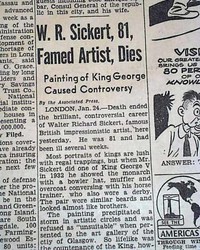 Offered is an original, historic, & collectible old newspaper: NEW YORK WORLD-TELEGRAM, January 24, 1942. * Walter Richard Sickert death * English Impressionist painter * The real "Jack The Ripper" ? Page 19 has a one column heading: "W. R. Sickert, 81, Famed Artist, Dies" with subhead. (see) Some believe him to be the real "Jack the Ripper". Complete with all 29 pages, light toning at the margins, small library stamp within the masthead, small binding holes along the spine, generally very nice.