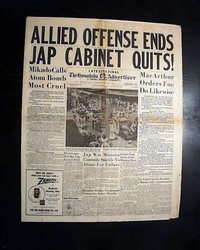 Offered is an original, historic, & collectible old newspaper: HONOLULU ADVERTISER--Late City Final edition, Hawaii, Aug. 15, 1945 * Japanese surrender - World War II * From the origin of the war (U.S.) The top half of the front page is taken up with a banner headline: "ALLIED OFFENSE ENDS" "JAP CABINET QUITS!" with various subheads, and a photo of celebratory sailors, the caption beginning: "Peace comes back to Honolulu...". A terrific issue, as this is the city where the war began for the United States. The complete first section with 16 pages (of 32), mild foxing & wear at the fold & margin, generally good condition.