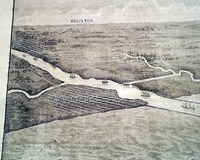 Offered is an original, historic, & collectible old newspaper: VELASCO DAILY TIMES, Texas, March 31, 1892Â  * Rare Southwestern title * Possibly the first time offered anywhere (see note) A rare title as it existed for less than six months. Velasco was a town in Texas that was later annexed by the city of Freeport. Founded in 1831, Velasco is situated on the east side of the Brazos River four miles from the Gulf of Mexico. The town's early history is closely tied with the Battle of Velasco and the Texas Revolution. Velasco was an important entry point for American settlers in Texas. In 1836 following the decisive Battle of San Jacinto, Velasco was named a temporary capital of the Republic of Texas by the interim President David G. Burnet. In 1837, the final actions of the Battl... See More 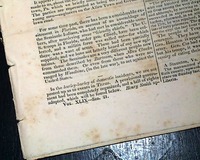 Offered is an original, historic, & collectible old newspaper: NILES' WEEKLY REGISTER, Baltimore, Jan. 2, 1836Â  * Smithsonian Institution creation * Texas War of Independence begins The front page includes a report prefaced in part by: "...A provisional government has been completely organized & a bill of rights adopted which will be found below..." and what follows is the: "Declaration of the People of Texas in General Convention Assembled" followed by the 8 posts of the Bill of Rights, including: "That they do notÂ  acknowledge that the present authorities of the nominal Mexican republic have the right to govern within the limits of Texas." and more.Â  This is followed--still on the front page--with a report beginning: "There has been some fighting...". Also of much interest is a... See More 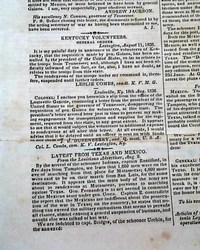 Offered is an original, historic, & collectible old newspaper: NILES' WEEKLY REGISTER, Baltimore, Aug. 20, 1836 * Treaty of Velasco * General Santa Anna * Texas Revolution ending Inside has "Latest From Texas and Mexico" which includes a significant letter signed in type by: Antonio Lopez De Santa Ana in which he agrees to the treaty between Texas and Mexico, known as the Treaty of Velasco. This is followed by the "Articles of the treaty concluded between his excellency Don Antonio Lopez de Santa Ana...president of the Mexican republic...and his excellency Don David Burnet, President of the republic of Texas" which includes all ten articles and the various signatures at the end. Bit close-trimmed to portions of these reports but no word loss. This document is noted as May 4th... See More 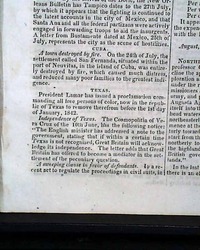 Offered is an original, historic, & collectible old newspaper: NILES' NATIONAL REGISTER, Baltimore, Aug. 22, 1840 Â  * Mirabeau B. Lamar - President of Texas * Orders all free African Americans to leave An inside page has a brief yet notable item headed: "Texas" reading: "President Lamar has issued a proclamation commanding all free persons of color, now in the republic of Texas to remove therefrom before the 1st day of January, 1842." This is followed by a brief item: "Independence of Texas" noting in part: "...English minster has addressed...that if within a certain time Texas is not recognised, Great Britain will acknowledge its independence...". Sixteen pages, 8 1/2 by 12 inches, very nice condition. As noted in Wikipedia, this title:Â "...(was) one of the most widely-cir... See More 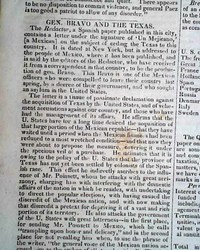 Offered is an original, historic, & collectible old newspaper: NILES' WEEKLY REGISTER, Baltimore, January 2, 1830 * on the purchase of Texas from Mexico One of the articles is headed: "Gen. Bravo and The Texas" with portions including: "...on the subject of ceding the Texas to this country...The letter is a ...passionate declamation against the acquisition of Texas by the United States, & of vehement accusations against our country...He affirms that the U. States have for a long time desired the acquisition of that large portion of the Mexican republic..." with much more, taking almost an entire column. Among the other reports in this issue are: "Chief Justice Marshall's Speech", much reporting from Congress, "Indians in Georgia", much on the "Navy Department", "Letter of Bolivar"... See More 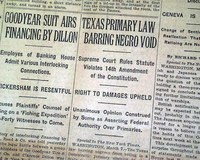 Offered is an original, historic, & collectible old newspaper: THE NEW YORK TIMES, March 8, 1927 * United States Supreme Court decision * Nixon v. Herndon re. 1923 Texas law * Blacks voting in Democratic Party primary The front page has a one column heading: "TEXAS PRIMARY LAW BARRING NEGRO VOID" with subheads. See below for information. Complete with all 42 pages, heavy foxing along the central fold, a few small binding holes along the spine, otherwise in good condition. wikipedia notes: Nixon v. Herndon, (1927), was a United States Supreme Court decision which struck down a 1923 Texas law forbidding blacks from voting in the Texas Democratic Party primary. Due to the limited amount of Republican Party activity in Texas at the time following the suppression of black voting ... See More 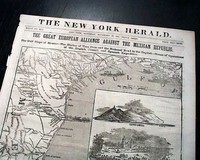 Offered is an original, historic, & collectible old newspaper: NEW YORK HERALD, Nov. 30, 1861 * Gulf of Mexico coast map * Texas - Mexico An extremely decorative issue, as the entire front page is taken up with a huge map headed: "THE GREAT EUROPEAN ALLIANCE AGAINST THE MEXICAN REPUBLIC" with a subhead: "The Gulf Slope of Mexico--The Harbor of Vera Cruz and the National Road to the Capital--Scene of Operations of the English, French and Spanish Expedition." with the map showing much details. There is an inset showing Cerro Gordo, Mexico City, Tampico, Castle of San Juan De Ulua, and a diagram of the city of Vera Cruz. In additional to showing the Mexican coastline the map extends to the cost of Texas and Louisiana as well, showing New Orleans, Sabine City, Galveston, Houston, P... See More 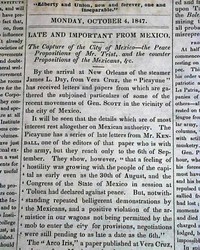 Offered is an original, historic, & collectible old newspaper: DAILY NATIONAL INTELLIGENCER, Washington, D.C., Oct. 4, 1847 * Final events of the Mexican War * Negotiation terms for surrender Fully half of page 2 is taken up with a wealth of reporting on the Mexican War, headed: "Late and Important From Mexico" "The Capture of the City of Mexico--The Peace Propositions of Mr. Trist and the Counter Propositions of the Mexicans". Included is a letter signed in type by: Winfield Scott to Santa Anna, with his response signed in type: Antonio Lopez de Santa Anna. A wealth of additional correspondence on the war as well. Page 3 continues with much war reporting, most of the focus being on the terms to be negotiated for the surrender the first point being: "The independence of Texas s... See More 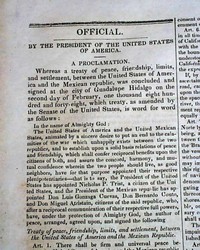 Offered is an original, historic, & collectible old newspaper: NATIONAL INTELLIGENCER, Washington, D.C., July 8, 1848 * Mexican War ends * Treaty of Guadalupe Hidalgo * Mexico - United States - Texas The top of page 2 has the very historic report of the official end of the Mexican War, beginning with: "A Proclamation" "Whereas a treaty of peace, friendship, limits, & settlement between the United States of America and the Mexican republic was concluded and signed at the city of Guadalupe Hidalgo..." followed by the balance of the text of the Proclamation by the President. This is then followed by the text of the actual Treaty, which takes 3 columns and includes all 23 articles with the signatures (in type) of 4 Mexican officials as well as the President: James K. Polk. Following t... See More 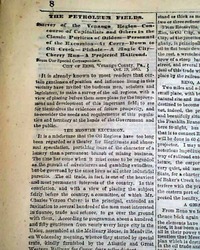 Shown is an original & historic old newspaper, offered to enhance your collectible interest: NEW YORK TRIBUNE, October 24, 1865 * Pithole, Pennsylvania & more The back page begins with: "THE PETROLEUM FIELDS" "Survey of the Venango Region" "Personnel of the Excursion" "At Corry" "Down to Oil Creek" "Pithole" and more, the reporting taking 1 1/3 columns. Also within: "THE FENIAN CONGRESS" "The Irish Republic Recognized" "Texas" "The Freedmen And The Bureau" and a baseball game report (see). Eight pages, nice condition. 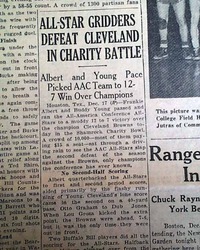