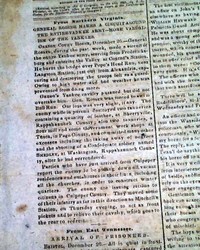 Offered is an original, historic, & collectible old newspaper: CHARLESTON DAILY COURIER, South Carolina, Dec. 28, 1863Â  * From the origin of the Civil War This was one of just a few Confederate newspapers that printed in the dateline: "Confederates States Of America". Among the reports are three front page Acts of the Confederate Congress; "Siege of Charleston"Â  "Atrocities of the American War". Most of the back page is taken up with advertisements with some military "Orders" as well. Complete as a single sheet issue, wide margins, wear at margins and some rubbing at folds, generally good. 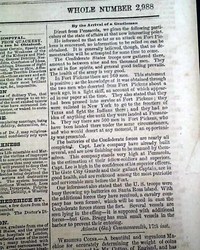 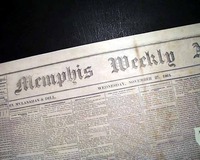 Offered is an original, historic, & collectible old newspaper: MEMPHIS WEEKLY APPEAL, Tennessee, November 27, 1861Â  * Rare Confederate stronghold publication This newspaper had a fascinating history during the Civil War. Memphis was a Confederate stronghold up through the Battle of Memphis on June 6, 1862, at which time the Yankees moved in and it became a Yankee city. Being a strong voice for the Confederacy, the "Memphis Appeal" newspaper would not continue under Yankee control. As Wikipedia notes: "...On June 6, 1862, the presses and plates were loaded into a boxcar and moved to Grenada, Mississippi, where it published for some time. The Appeal later journeyed to Jackson, Mississippi, Meridian, Mississippi, Atlanta, Georgia, and finally Montgomery, Alabama, where the plates wer... See More 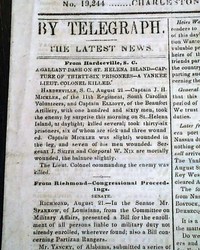 Offered is an original, historic, & collectible old newspaper: CHARLESTON DAILY COURIER, South Carolina, August 22, 1862Â  * Battle of Cedar Mountain (Slaughter) * A General Stonewall Jackson victory * From the origin of the Civil War start This was one of only a few newspapers which printed: "Confederate States of America" in the dateline & at the top of pages 2, 3 & 4. The ftpg. includes: "From Hardeeville, S.C.--A Gallant Dash on St. Helena Island--Capture of 36 Prisoners--A Yankee Lieut. Colonel Killed" "From Chattanooga, Tenn. -- Barhamsville, Tenn., In Possession of the Confederates--Capture of the Federal General Logan" "From Grenada, Miss--Northern News" "The Forts at Port Royal" "Benefits of the Blockade" & a few other smaller items. The best content would be the bkpg. r... See More 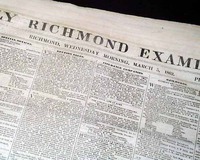 Offered is an original, historic, & collectible old newspaper: DAILY RICHMOND EXAMINER, Virginia, March 5, 1862 * General Gideon Johnson Pillow * Battle of Fort Donelson - Tennessee * From the capital of Confederacy A nice newspaper from the capital of the Confederate States of America. Page two has much detail on: "The Battles At Fort Donelson - General Pillow's Report - Battle of Trenches, Feb. 11 - Battle of Dover, Feb. 15th" with the report signed in type by: Gid. J. Pillow, Brig. General Confederates States Army. Page 2 also has an editorial on events of the Civil War, primarily the battle of Fort Donelson, noting: "...The cause of the final surrender is indicated by the General & confirmed by all other witnesses, is now quite clear. The enemy had completely surrounded the pla... See More