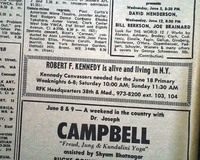 Offered is an original, historic, & collectible old newspaper: THE VILLAGE VOICE, Greenwich Village, New York, June 6, 1968Â  * The shot that shattered the Velvet Underground * Attempted assassination of Andy Warhol * Bobby Kennedy is alive? The feature article of this issue is regarding the shooting of Andy Warhol by Valarie Solanis: "The Shot that Shattered The Velvet Underground." Two related photos are present, and the coverage continues on an inside page. In a bizarre twist of fate which is a bit stranger than fiction, Robert (Bobby) Kennedy died this same day at the hand of an assassin, and although the coverage was not included since this issue had already been printed, the back page has an eerie ad for help with his campaign which states: "ROBERT F. KENNEDY is alive and l... See More 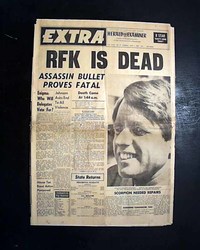 Offered is an original, historic, & collectible old newspaper: HERALD-EXAMINER--EXTRA, Los Angeles, June 6, 1968 * Robert F. Kennedy shot dead The banner headline announces: "RFK IS DEAD" with a subhead: "Assassin Bullet Proves Fatal". Also a very large photo of: "Sen. Robert Kennedy" This is the city in which he was shot and died. Much more inside including a full page pictorial. The complete first section with pages 1-24. Some wear at the margins & the central fold, generally good. 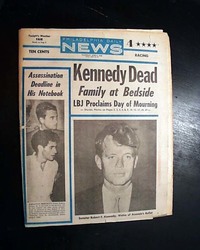