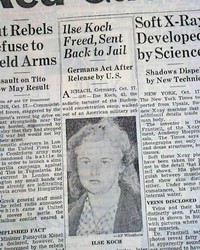 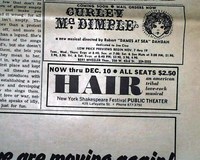 Offered is an original, historic, & collectible old newspaper: THE VILLAGE VOICE, Greenwich Village, New York, October 19, 1967 * A extremely rare ad for the Broadway Hit - "HAIR" - prior to making it to Broadway * The Public Theater - Greenwich, in the Village's own iconic newspaper Prior to making it to Broadway and becoming one of the most famous musicals to hit the stage, the musical "Hair" appeared off-Broadway at The Public Theater in Greenwich Village. This issue contains two ads for the show. Due to its limited engagement, and it being prior to its incredible Broadway success, such ads are extremely rare - and even more so when from Greenwich Village's own iconic newspaper. Other ads include those for Jefferson Airplane, Arlo Guthrie, Donovan, and more, as well as a feature... See More