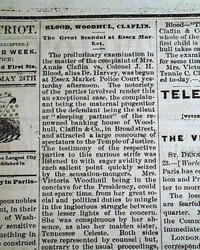 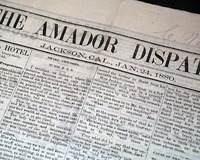 Offered is an original, historic, & collectible old newspaper: AMADOR DISPATCH, Jackson, California, Jan. 24, 1880 Â  * Rare old West publication Jackson was founded in 1848 around a year-round spring, settled by American pioneers and then gold-seekers upon its discovery at the foothills of the Sierra Nevada range. It was also a convenient stopping place on the road from Sacramento to the southern mines. The back leaf has a 2 1/2 by 4 1/2 piece clipped out, otherwise nice condition. 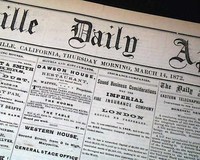 Offered is an original, historic, & collectible old newspaper: MARYSVILLE DAILY APPEAL, California, July March 21, 1872 * Rare Old West title In the days of the California Gold Rush, Marysville was a stopping point for riverboats from Sacramento and San Francisco that carried miners on their way to the digging grounds. A sign on the roadside as one enters Marysville carries the slogan: "Gateway to The Gold Fields." At that time it was one of the largest cities in California, named after one of the survivors of the Donner Party tragedy. News of the day plus a great wealth of ads. Complete with 4 pages, light toning at the margins, a little irregular along the spine, nice condition. 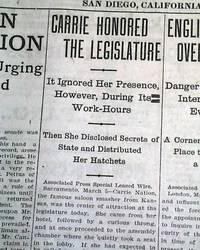 Offered is an original, historic, & collectible old newspaper: THE EVENING TRIBUNE, San Diego, March 5, 1903 * Carrie Nation at Sacramento * Temperance advocate * Anti-alcohol leader The top of the front page has a one column heading: "CARRIE HONORED THE LEGISLATURE" with subheads. (see) Surprisingly this issue is in good condition being from the "wood pulp" era. Very hard to find issues that are not totally fragile from this era in paper. Complete with 6 pages, small library stamps within the masthead, a few small binding holes along the spine, generally very nice. source, L.A. Times: In Sacramento, she barged in on the state Assembly at the Capitol, speaking for half an hour to cheers and applause. She rebuked legislators for patronizing liquor joints. As she left, she hand... See More 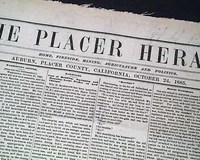 Shown is an original & historic old newspaper, offered to enhance your collectible interest: THE PLACER HERALD, Auburn, Placer County, California, October 24, 1885 * Rare Old West title Placer mining in the Auburn area was very good, with the camp first becoming known as the North Fork Dry Diggings, later changed to Woods Dry Diggings. The area soon developed into a mining camp, and it was officially named Auburn in 1849. In 1851 Auburn was chosen as the seat of Placer County. Gold mining operations moved up the ravine to the site of present-day Auburn. In 1865, the Central Pacific Railroad, the western leg of the First Transcontinental Railroad, reached Auburn, as it was being built east from Sacramento toward Ogden, Utah. Various local & national news plus a wealth of ads. Wight... See More