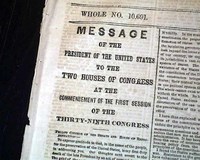 Offered is an original, historic, & collectible old newspaper: THE NEW YORK HERALD, Dec. 6, 1865 * President Andrew Johnson * State of the Union Address * Post-Civil War reconstruction The top of the 1st column of the front page has a one column heading: "MESSAGE of the President Of The United States To The Two Houses Of Congress...." Text of the address takes up 5 columns, all on the front page and is signed in type: Andrew Johnson. Complete with 12 pages, nice condition. 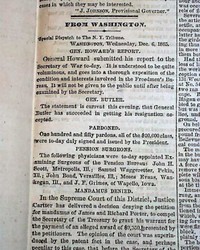 Offered is an original, historic, & collectible old newspaper: NEW YORK TRIBUNE, Dec. 7, 1865Â  * End of Slavery in America * 13th Amendment becomes law * Official announcement The top of page 7 has first column heads announcing the very historic report that the 13th Amendment, which ended slavery in the United States, became the law of the land when the required number of states ratified the amendment on December 6. The heads include: "THE CONSTITUTIONAL AMENDMENT" "It Is Adopted by Georgia" "The Twenty-Seventh State" "Freedmen To Be Protected" with the report being relatively brief, including two dispatches from the capital of Georgia announcing its passage by the state legislature. A very notable and timely report as ratification happened just the day prior. Complete in ... See More 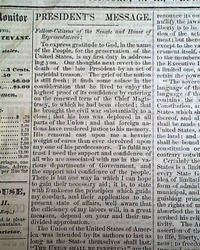 Shown is an original & historic old newspaper, offered to enhance your collectible interest: CONCORD DAILY MONITOR, New Hampshire, Dec. 6, 1865 * President Andrew Johnson * State of the Union Address * Civil War reconstruction Most of the front page and page 2 are taken up with the: "President's Message", being the first state-of-the-union address of President Andrew Johnson. The focus of his speech is the end of the Civil War with comments on the Lincoln assassination: "...Our thoughts next revert to the death of the late President by an act of parricidal treason. The grief of the nation is still fresh; it finds some solace in the consideration that he lived to enjoy the highest proof of its confidence..." with more. It is signed at its conclusion: Andrew Johnson. Four pages, ... See More