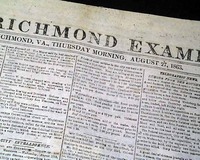 Offered is an original, historic, & collectible old newspaper: DAILY RICHMOND EXAMINER, Richmond, Virginia, August 27, 1863Â  * P. G. T. Beauregard letter * re. Battle of Gettysburg * From the Confederate capital A nice newspaper from the capital of the Confederacy, the city to which all war-related news would flow. In additional to many advertisements, the front page has: "From General Lee's Army & The Valley--Other Movements" "Another Prize on the Rappahannock" "Look At Them" "The Situation In Tennessee" "Yankee Raid Into King George" "From Mississippi" "City Intelligence" "Rumors From the Southwest" and other smaller items. The back page is surrounded by a wide black mourning rule for the death of the former governor, as noted at the beginning of the editorial: "The Hon. John ... See More