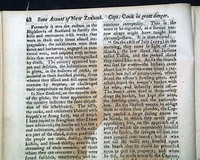 Offered is an original, historic, & collectible old newspaper: THE GENTLEMAN'S MAGAZINE, London, February, 1780Â  * Siege of Savannah - Georgia * Benjamin Lincoln letter * Captain James Cook - South Seas Near the back is a section headed: "Advices Received from America" which includes: "Gen. Lincoln's Letter to Congress on the defeat of the combined Army before Georgia" with a dateline of Charleston, Oct. 22, 1779. This letter concerns the battle for Savannah & takes nearly a full page, signed in type: B. Lincoln, and includes mention of the death of Count Pulaski. Also of great interest is a nice article headed: "Some Account of New Zealand. Capt. Cook in Great Danger". Included with this article is the referenced full page plate captioned: "View of an Arched Rock on the Coast o... See More 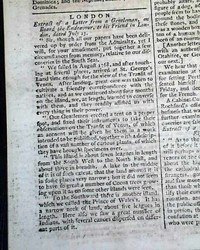 Offered is an original, historic, & collectible old newspaper: THE LONDON CHRONICLE, England, July 30, 1771Â  * HMS Endeavour - Royal Navy * Captain James Cook * 1st voyage of South Pacific An inside page has an: "Extract of a Letter from a Gentleman on Board the Endeavour...", which includes in part: "We sailed in August, 1768 and after touching at several places, arrived at St. George's Land...great care was taken to cultivate a friendly correspondence with the natives..." with more, taking over a full column. Eight pages, 8 1/2 by 11 inches, nice condition. 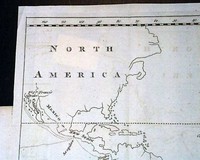 Offered is an original, historic, & collectible old newspaper: THE GENTLEMAN'S MAGAZINE, London, December, 1773 * Captain James Cook * North America map Certainly the prime feature of this issue is the nice foldout map which accompanies the lengthy article: "Epitome of Lieut. Cooke's Voyage Round the World", showing most of North America, all of South America down to Cape Horn, and even portions of West Africa, Spain, France & England. Notice the shape of Florida & California. This map folds out to 9 3/4 by 11 1/2 inches, very nice condition with a bit of light foxing at a fold. The article takes nearly 7 pages and begins: "The voyage abounds with so many interesting & entertaining particulars, relative to new discoveries, that in our epitome we have but slightly touched on what... See More