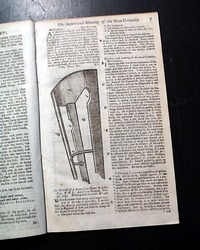 Offered is an original, historic, & collectible old newspaper: THE GENTLEMAN'S MAGAZINE, London, January, 1746Â Â  * The Jacobite Rebellion * Battle of Falkirk w/ diagram There is good content on the Jacobite Rebellion with: "Order of Battle at Falkirk-muir" being a textual diagram of the placement of troops, with other related text concerning the Battle of Falkirk. Also: "How the most noble Party of Free-Thinkers will suffer by the Success of the present Rebellion", "A Second Letter to the Jacobites" "Extract of a Letter from a Gentleman at Derby" and: "Accounts of the Motions of the Rebels & of the King's Forces...", the latter taking over 7 pages. Also within: "Orders of the Young Pretender & his Generals" "Orders issued by the young Pretender for payment of the land tax, and... See More 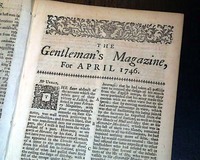 Offered is an original, historic, & collectible old newspaper: THE GENTLEMAN'S MAGAZINE, London, April, 1746Â  * Battle of Culloden * End of the Jacobite Rebellion * Bonnie Prince Charlie There is much fine content on the Jacobite Rebellion including the very first article noted in the table of contents as: "The Young Pretender's reasons for Retiring from Stirling & account of his affairs in Scotland, sent to his Father". Additional content on the Rebellion is found in over 8 pages of: "Accounts of the Motions of the Rebels and of the King's Forces from the London Gazette...", which includes numerous reports including "Journal of what passed at Fort William" "Siege of Fort William Raised" and "Rebels Totally Defeated". But by far the most significant item is the ... See More 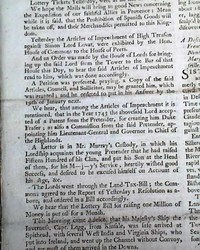 Offered is an original, historic, & collectible old newspaper: EDINBURGH EVENING COURANT, Scotland, Dec. 23, 1746Â  * Simon Fraser, 11th Lord Lovat * Jacobite Rebellion conspirator The front page has a notable item concerning the end of theÂ  Jacobite Rebellion: "Yesterday the articles of impeachment of High Treason against Simon Lord Lovat, were exhibited by the Hon. House of Commons to the House of Peers. And an order was made by the House of Lords for bringing up the said Lord from the Tower to the bar of that House this day to hear the said articles of Impeachment read to him...We hear, that among the articles of Impeachment it is mentioned that in the year 1743 the above said Lord accepted of a patent from the Pretender for creating him Duke Fraser, as also...a commission from th... See More