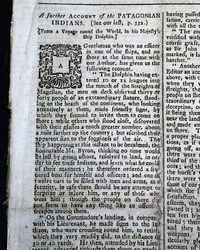 Offered is an original, historic, & collectible old newspaper: THE LONDON CHRONICLE, England, April 14, 1767Â  * Very early tennis The front page has: "A Further Account of the Patagonian Indians". Inside has a rare & very early tennis report: "Yesterday the great match at Tennis between Tomkyns and Maccon was determined in favour of the latter; many of the nobility were present, and considerable bets depending." Also a report headed "America" is datelined from Pensacola, West Florida. Eight pages, some rubbing to the front page, an archival mend on page 2, generally nice. 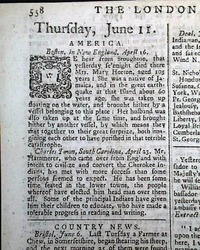 Offered is an original, historic, & collectible old newspaper: THE LONDON CHRONICLE, England, June 11, 1767Â  * Early Native Americans * Cherokees - Indians Inside has reports from Boston and Charleston headed: "America" with reports datelined Boston and Charleston, the latter noting: "Mr. Hammerer, who came over from England with intent to civilize and convert the Cherokee Indians, has met with more success than some persons seemed to expect...have elected him head man over them all. Some of the principal Indians have given him their children to educate...". Eight pages, 8 1/4 by 11 inches, very nice condition. 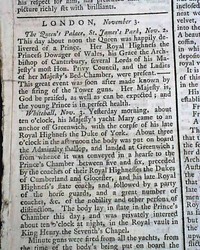 Offered is an original, historic, & collectible old newspaper: THE GLOCESTER JOURNAL, England, Nov. 9, 1767 * Early Southern America report (currently spelled Gloucester) The ftpg. has most of the first column taken up with details of the funeral of the Duke of York & Albany, younger bother to King George III. He died in Monaco while on a trip but was buried in Westminster Abbey. Pages 2 & 3 contains letter from Charleston, one bit noting: "...I must then tell you we are all running made as fast as we can & seem to vie with each other in giving proofs of our disaffection to the British government...". This details on plans to destroy any ship what would arrive a a port out of respect for the non-importation agreement. Four pages, a very nice & decorative masthead featuring e... See More