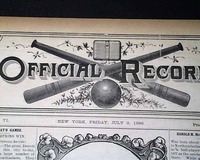 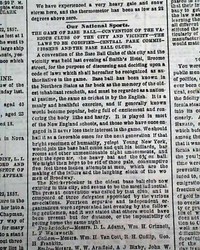 Offered is an original, historic, & collectible old newspaper: THE NEW YORK HERALD, January 23, 1857Â  * Birth of organized baseball * First convention of clubs The back page has a report which could be considered the birth of organized baseball. And printed the day after the event happened! The second column has an article headed: "Our National Sports" with subheads: "The Game of Base Ball--Convention of the Various Clubs Of the City and Vicinity--The Laws to Be Codified--Central Park Commissioners & the Base Ball Clubs". Over half of the column is taken up with the report of the historic January 22, 1857 convention of baseball teams. Its significance is noted by none other than John Thorn, the official Historian for Major League Baseball. The article begins: "A convention ... See More 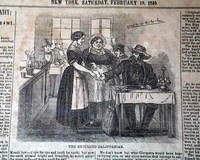 Offered is an original, historic, & collectible old newspaper: NEW YORK CLIPPER, Feb. 19, 1859Â  The masthead has a sporting theme, showing cricket, boxing, horse racing, & sailing. The ftpg. features a print: "The Returned Californian" which related to a story on the ftpg.Â  Inside is primarily filled with various sporting reports including: "Canine" "Sparring" Cocking" "The Trigger" "The Game of Chess" and more. Eight pages, various foxing & some damp stain, some older tape repairs. 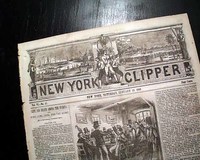 Offered is an original, historic, & collectible old newspaper: NEW YORK CLIPPER, Jan. 29, 1859Â  * Bullfighting in Cuba illustration Basically a sports-themed newspaper with a great, sports-themed masthead. Among the reports inside are: "The Ring" "The Turf" "Fistiana" "Pedestrianism" "The Game of Chess" "Chequers Or Draughts" "The Trigger" "Canine" and more. The back page has a rather large print of: "Bull Fighting In Havana" with a related article. Eight pages, good condition. 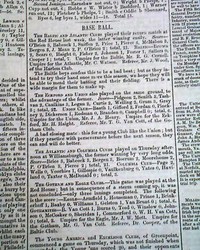 Offered is an original, historic, & collectible old newspaper: PORTER'S SPIRIT OF THE TIMES, New York, Oct. 25,1856Â  * Very early pre-Civil War baseball A nice sports-themed newspaper from before the Civil War, which has nearly half a column of various reports under the heading: "Base Ball". There are reports on 5 baseball games with commentary which would seem odd today. One item notes: "The Baltic boys confess this to be a bad beat; but as they intend to try their hand once more this season, we hope they will be able to mend their batting and their fielding...". Sixteen pages, 11 by 16 inches, nice condition. 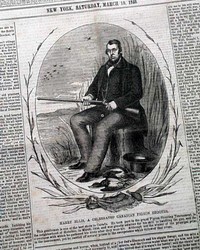 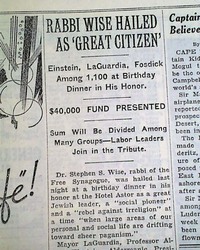 Shown is an original & historic old newspaper, offered to enhance your collectible interest: THE NEW YORK TIMES, March 20, 1934 * Stephen Samuel Wise honored - Jewish * Reform Judaism rabbi - Zionist leader The top of page 11 has a one column heading: "RABBI WISE HAILED AS 'GREAT CITIZEN'" with subheads. (see) First report coverage on the honoring of Zionist leader, Stephen Samuel Wise, at a birthday dinner in NYC. Other news, sports and advertisements of the day. Complete in 46 pages, this is the rare rag edition that was produced on very high quality newsprint, with a high percentage of cotton & linen content, allowing the issues to remain very white & sturdy into the present. Given the subscription cost, libraries & institutions rather than individuals were the primary subscri... See More 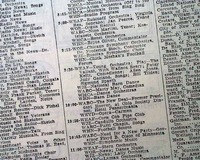 Shown is an original & historic old newspaper, offered to enhance your collectible interest: THE NEW YORK TIMES, Nov. 16, 1935 * Actress & singer Judy Garland * Wizard of Oz movie fame This is an interesting newspaper for any Judy Garland collector, as this is the very first appearance of her name (as Judy Garland) in the prestigious New York Times. Page 20 has a daily list of "Today On the Radio" and among the hundreds of listings is: "9:30 WEAF--Young Orchestra; Play--The Valiant, With Wallace Beery; Patsy Kelly, Commedienne; Allen Jones, Judy Garland, Songs; Bill Tilden; Sigmund Spaeth" being a very inconspicuous report. This was four years before she would find stardom in "The Wizard of Oz." Other news, sports and and advertisements of the day. Complete in 32 pages, rag editi... See More