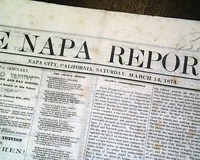 Offered is an original, historic, & collectible old newspaper: THE NAPA REPORTER, Napa City, California, March 14, 1874Â  * Rare old West title * Wine country Although in the heart of the wine region, for which this city is famous today, its beginnings were centered more on the California Gold rush of 1849. This city became a refuge for miners during the first severe winter of mining & later became an important center for lumber & cattle ranches. The front page has a lengthy, continued article on: "Alaska Correspondence" with the inside pages having various local news reports & a wealth of ads, many illustrated. Four pages, never bound nor trimmed, nice condition. Folder size noted is for the issue folded in half. 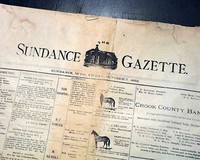 Offered is an original, historic, & collectible old newspaper: THE SUNDANCE GAZETTE, Wyoming, Oct. 7, 1892Â  * Very rare Old West publication We were fortunate to fine just three issues of this quite rare newspaper from the Northeast corner of Wyoming. The first we have seen. The first we have seen. Gregory's "Union List of American Newspapers" notes only one institution has this title, it having just a single issue from 1884. By the content and the advertisements Sundance must have been a cattle town. The 2010 census notes a population of less than 1200. Inside has some illustrated articles including: Tribes Of Cannibals" "The Tribes of Alaska". Eight pages, never bound nor trimmed, wear at the spine margins, a bit of light fold rubbing, generally good condition. This is not... See More 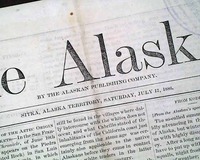 Offered is an original, historic, & collectible old newspaper: THE ALASKAN, Sitka, Alaska Territory, July 17, 1886 * Very rare Alaska Territorial issue Rarely are newspapers from Alaska found from before the Klondike Gold Rush of 1897 when interest grew dramatically. This newspaper pre-dates the gold rush by over ten years. This is the volume one, number 37 issue of this title. The format of the newspaper is much like other newspapers of the day, being four pages of small folio size (measures 12 3/4 by 20 1/4 in.). The front page has an interesting article about the Eskimos, titled: "From Kodiak" which begins: "The so-called summer season is rapidly advancing in this central region of Alaska, but winter seems to cling to us with highly disagreeable persistency..." with much mo... See More