Home > Back to Search Results > Not all girls are demure damsels... Convicts for America...
Click image to enlarge 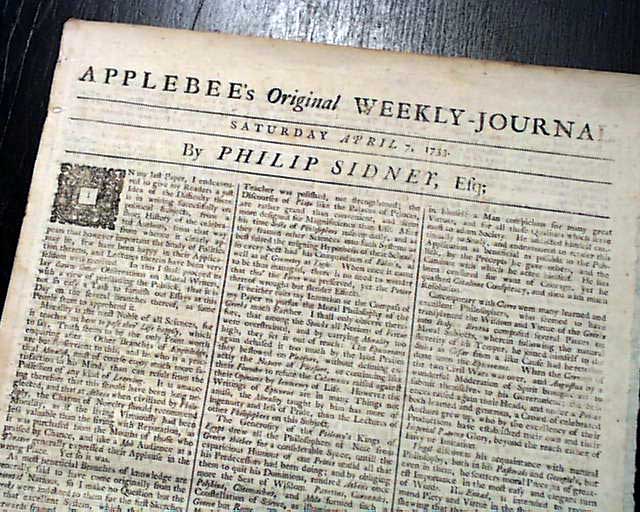 Not all girls are demure damsels... Convicts for America...


APPLEBEE'S ORIGINAL WEEKLY JOURNAL, London, England, April 7, 1733  A quite rare title which existed from 1720-1737 with most of the news reports on pages 2 and 3.
The news is almost entirely of British interest and consists more of brief, wide-ranging news items rather than lengthy articles. Some are very curiously written, at least by today's standards.
One bit has: "...a young girl stabbed a rude fellow, into the breast with a knife, for giving her some ill usage as she was passing over Essex Bridge. He took her for one of the demure itinerant damsels..." and another item mentions: "...Mr. Flower, a journeyman printer, being in liquor, attempting to make water out of the window of his lodgings...fell thro' and dashed out his brains."
Yet another report from Dublin notes: "...Last Saturday about 40 men and women convicts were shipp'd off in our harbour to be transported to his Majesty's Plantations in America, but 4 have made their escape."
Four pages, 9 1/4 by 14 inches, red tax stamp on the front page, very nice condition.