Home > Back to Search Results > Harry Truman Doctrine in 1947....
Click image to enlarge 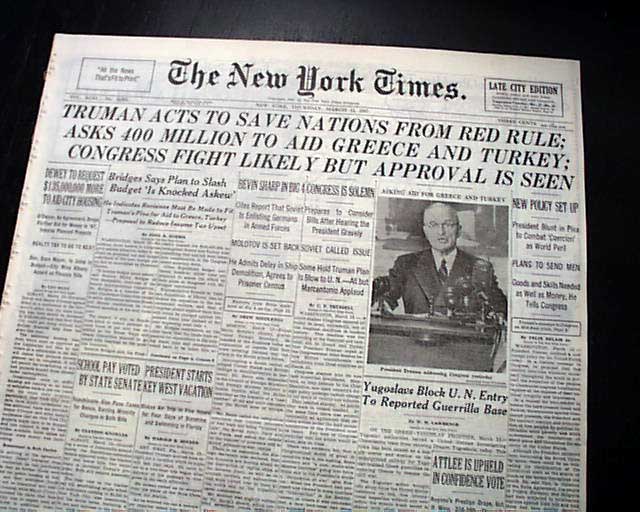 The front page has a nice banner headline announcing: "TRUMAN ACTS TO SAVE NATIONS FROM RED RULE; ASKS 400 MILLION TO AID GREECE AND TURKEY; CONGRESS FIGHT LIKELY BUT APPROVAL IS SEEN" with subheads and photo. (see) Much more on the following pages with complete text. Always nice to have notable events in history reported in this World famous publication.
Other news, sports and advertisements of the day. Complete with all 56 pages, rag edition in great condition.
wikipedia notes: The Truman Doctrine was a proclamation by U.S. president Harry S. Truman on March 13, 1947. It stated that the U.S. would support Greece and Turkey with economic and military aid to prevent their falling into the Soviet sphere. The Doctrine shifted American foreign policy as regards the Soviet Union from Dtente to, as George F. Kennan phrased it, a policy of containment of Soviet expansion. Historians often use it to mark the starting date of the Cold War.