Home > Back to Search Results > Much on the Hamilton & Burr duel...
Click image to enlarge 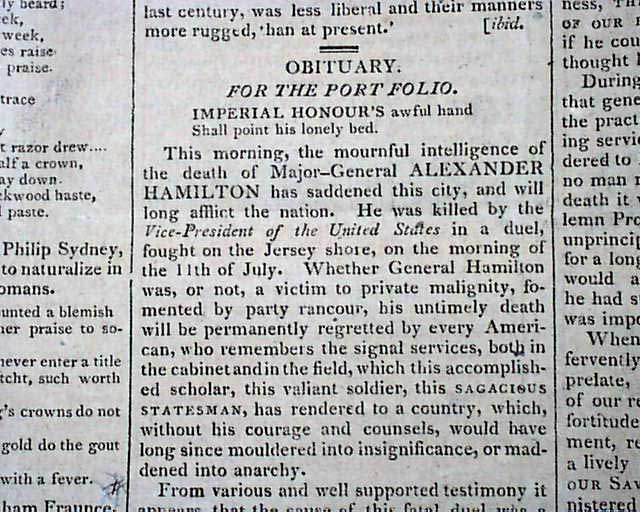 
THE PORT FOLIO, Philadelphia, July 14, 1804  Inside has: "Obituary" which begins: "This morning the mournful intelligence of the death of Major-General ALEXANDER HAMILTON has saddened this city & will long afflict the nation. He was killed by the Vice President of the United States in a duel, fought on the Jersey shore on the morning of the 11th of July..." with much more. Further on is: "...From various...testimony it appears that the cause of this fatal duel was a letter...in which it was stated that General H. had said in conversation, he thought Col. Burr a dangerous man & who ought not to be trusted..." with more, and it continues with some particulars of the duel, including: "...On Wednesday at the dawn he repaired to Hoboken...to meet colonel Burr. On the way General Hamilton declared to his friend & second that he should not fire at the challenger, nor had the slightest wish to molest him. General H. received the fire of his antagonist, fell, pronounced himself a dead man..." with much, much more on his final moments, and then: "...at 2 o'clock, he died, surrounded by a multitude of sorrowing friends..." and even more.
This is one of the better Hamilton/Burr duel reports we have seen. Complete in 8 pages, 10 by 12 3/4 inches, very nice condition.