Home > Back to Search Results > Harlem race riot of 1935...
Click image to enlarge 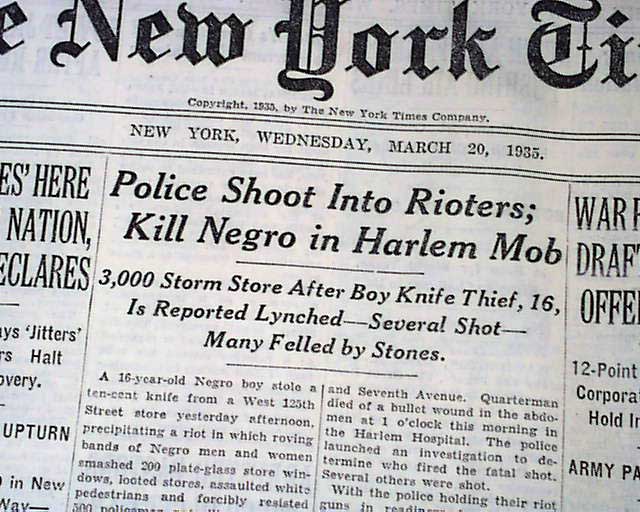 The top of the front page has a two column heading: "Police Shoot Into Rioters; Kill Negro in Harlem Mob" with subhead. (see) Lengthy text continues on page 15. Great to have in this famous NYC publication.
Complete with all 44 pages, rag edition in very nice condition.

wikipedia notes: The Harlem riot of 1935 took place on March 19, 1935 during the Great Depression, in New York City, New York, in the United States. It has been described as the first "modern" race riot in Harlem, because it was committed primarily against property rather than persons. Harlem is a northern neighborhood on Manhattan Island in New York City whose population at the time was predominately African American.
The rioting was sparked by rumors that a black Puerto Rican teenage shoplifter was beaten by employees at an S. H. Kress "five and dime" store. That evening a demonstration was held outside the store and, after someone threw a rock through the window, more general destruction of the store and other white-owned properties ensued. Three people died, hundreds were wounded, and an estimated $2 million in damages was caused to properties throughout the district. African American-owned homes and businesses were spared the worst of the destruction.