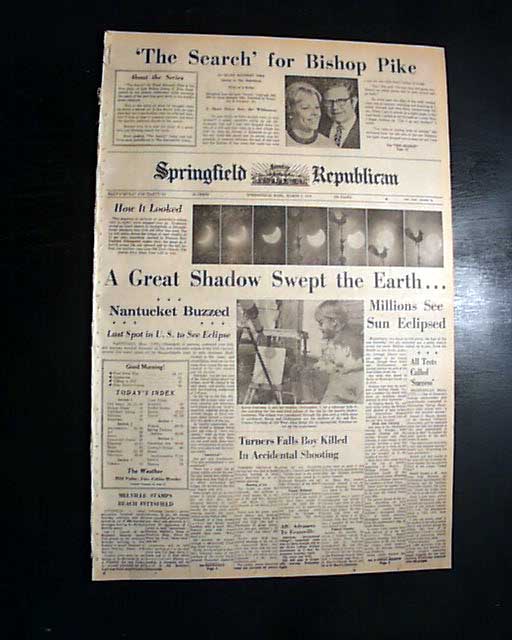 The front page has the full-banner headline: "A Great Shadow Swept the Earth... Millions See Sun Eclipsed", with multiple photos and supporting text. Page 2 covers the eclipse in its entirety - with multiple articles and photos. The was the first eclipse televised by CBS in color, and was *referenced in the song, "You're So Vain," by Carly Simon. It was referred to as a "Once-in-a-Lifetimer."
Page 47 has a small photo with a related caption showing Notre Dame's Austin Carr - mentioning he had just set a NCAA record (which still stands) for the most points scored in a game. An unrelated photo is of a young Pete Rose.
Believed to be complete in and in good condition (save for a few small mends on unrelated pages), but is being offered for the described content.
Note: The front page calls for 196 pages, but the issue only has 92. However, the 92 pages cover every item mentioned in the issue's Index. It is likely the "196" was either a typo or included inserts and other forms of advertising.
* For the record, the eclipse was seen in Nova Scotia.