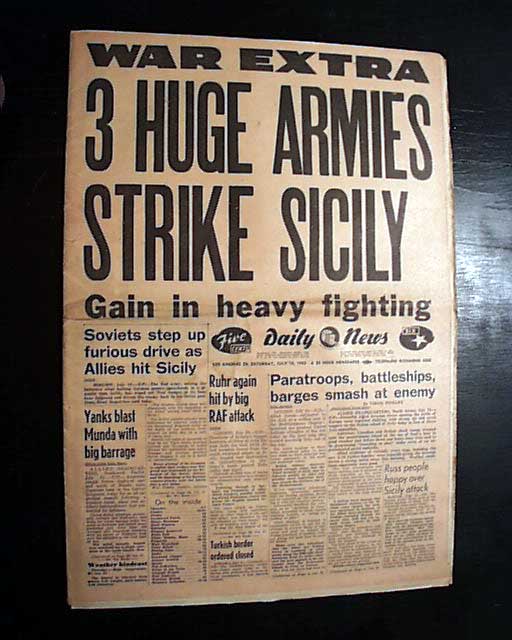 The front page has a great banner headline in large lettering above the masthead: "3 HUGE ARMIES STRIKE SICILY" with subheads. Nice for display. First report coverage on the initial invasion of Sicily Italy named Operation Husky.
Complete with all 32, large tabloid size, front and back leafs are of pinkish color, minimal wear, nice condition.

wikipedia notes: The Allied invasion of Sicily, codenamed Operation Husky, was a major World War II campaign, in which the Allies took Sicily from the Axis (Italy and Nazi Germany). It was a large scale amphibious and airborne operation, followed by six weeks of land combat. It launched the Italian Campaign.

Husky began on the night of July 9, 1943, and ended August 17. It was the largest amphibious operation of the war in terms of men landed on the beaches and of frontage. Strategically, Husky achieved the goals set out for it by Allied planners. The Allies drove Axis air and naval forces from the island; the Mediterranean's sea lanes were opened and Italian dictator Benito Mussolini was toppled from power. It opened the way to the Allied invasion of Italy.