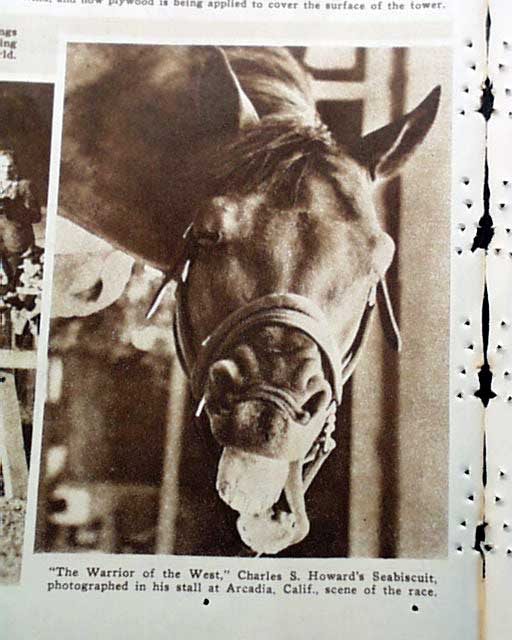 The bottom of page 2 of this section has two related photos regrading Seabiscuit's victory at the Santa Anita Handicap with heading: "$400,000 HORSE" and some text. (see) This would be Seabiscuit's last major race as he would retire a few weeks later. The back page has a few photos related to magic with a photo of Houdini in shackles.
Rotogravure section (part II) with 8 pages, rag edition, large cutout on the 3rd leaf (pages 5-6) (unrelated) (see), otherwise nice.

wikipedia notes: One race was left in the season. A week after the San Antonio, Seabiscuit and Kayak II both took the gate for the Santa Anita Handicap and its $121,000 prize. 78,000 paying spectators crammed the racetrack, most backing Seabiscuit. Pollard found his horse blocked almost from the start. Picking his way through the field, Seabiscuit briefly led. As they thundered down the back straight, Seabiscuit became trapped in third place, behind leader Whichcee and Wedding Call on the outside.
Trusting in his horse's acceleration, Pollard steered between the leaders and burst into the lead, taking the firm ground just off the rail. As Seabiscuit showed his old surge, Wedding Call and Whichcee faltered, and Pollard drove his horse on, taking "The Hundred Grander" by a length and a half from the fast-closing Kayak II under jockey Leon Haas. Pandemonium engulfed the course. Neither horse and rider, nor trainer and owner, could get through the crowd of well-wishers to the winner's enclosure for some time.