Home > Back to Search Results > Re: The Battle of Chancellorsville... Bridging the Rappahannock...
Click image to enlarge 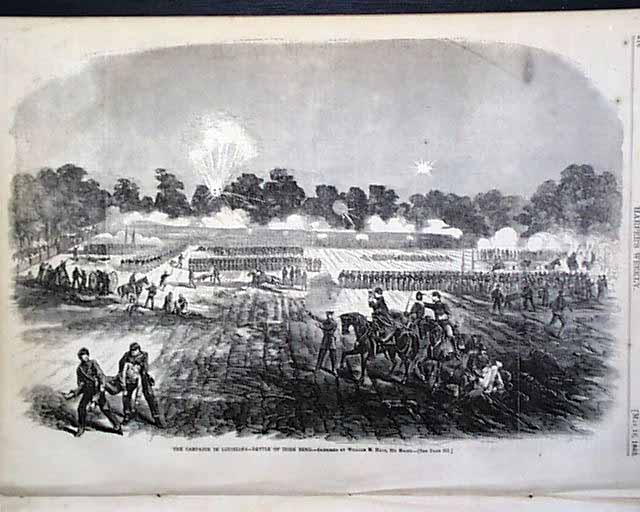 Re: The Battle of Chancellorsville... Bridging the Rappahannock...


HARPER'S WEEKLY, New York, May 16, 1863  The full front page is taken up with: "Building Pontoons on the Rappahannock". Inside has two fullpgs. with 5 views captioned: "Russell's Brigade (First Division Sixth Army Corps) Crossing the Rappahannock in Pontoons to Storm the Rebel Works" "Bridges & Rifle Pits at United States Ford" "The 8th Pennsylvania Cavalry Crossing at Ely's Ford" "Pontoon Bridges Over the Rappahannock, Built for Reynolds's Corps" & "Pontoon Bridges Erected for General Sedgwick's Corps to Cross".
Fullpg map of "...Eastern Virginia from 'Fredericksburg' to Richmond'..."; a nice doublepage centerfold with 7 scenes of: "The Campaign in the Southwest" includes scenes around Vicksburg. Fullpg: "The Campaign in Louisiana--Battle of Irish Bend" and "Camp of the Twelfth Massachusetts Regiment Near Falmouth, Virginia".
The back page has a political cartoon showing Abraham Lincoln and John Bull. Complete in 16 pages.