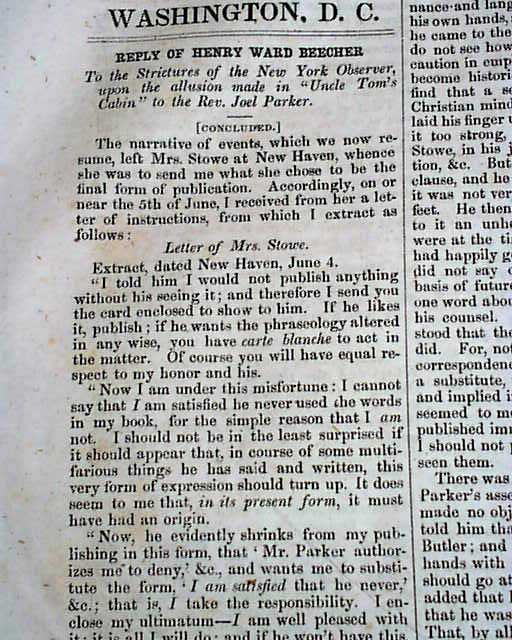 This newspaper is forever linked to the best-selling novel of the 19th century: "Uncle Tom's Cabin", for the book was originally released as a 40 week serial in this anti-slavery newspaper beginning in June, 1851. It was the newspaper's publisher who encouraged Stowe to produce the work in book form, and it is common consensus that the book had much to do with popularizing sentiment which lead to the Civil War.
So it is not surprising that this issue has much content on the book and Harriet Beecher Stowe. The great content takes almost the entire back page, being a concluded series of letters between Harriet Beecher Stow and Rev. Joel Parker. The latter felt he was portrayed very unfavorably in Uncle Tom's Cabin and his letters ask for redress from the author. These are quite famous letters & can be read in several websites.
Also on the bkpg. is an ad: "Uncle Tom's Cabin: which begins: "Mrs. Harriet Beecher Stowe's great story, first published in the National Era, and now just issued in two handsome volumes..." with details on buying it.
Page 2 has a report headed: "Death Of Daniel Webster" taking half a column.
Four pages, good condition. Folder size noted is for the issue folded in half.