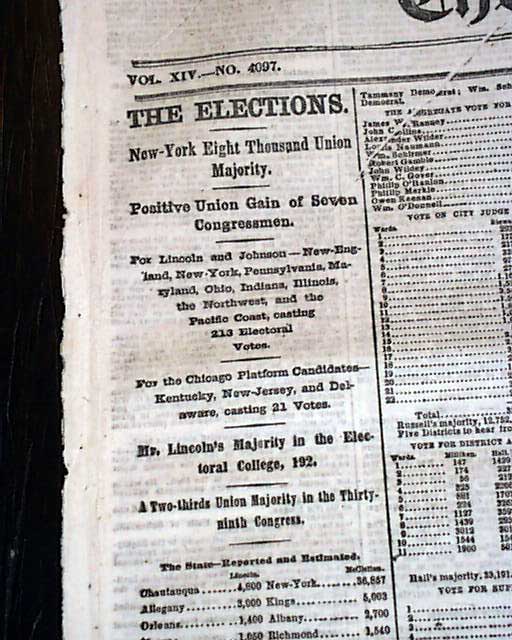 The entire front page is taken up with the results of the national election, with the top of the first column having some nice heads including: "THE ELECTIONS" "New York Eight Thousand Union Majority" "For Lincoln and Johnson--New England, New York, Pa., Maryland, Ohio, Indiana, Illinois, the Northwest, and the Pacific Coast, casting 213 Electoral Votes" "Mr. Lincoln's Majority in the Electoral College, 192" and a bit more (see). There is also a list of votes by county, for both Lincoln and McClellan. The balance of the ftpg. is taken up with election results in other districts and other states.
There is some further election reports on pg. 4, including one report headed: "The State" which begins: "The Electoral Vote of New York is for Mr. Lincoln by the decided majority of six or eight thousand. Our corrected & latest returns leave no doubt of the result..." and there is another article headed: "President Lincoln" "A Congratulatory Visit--Speech by the President" with the text as shown in the photos.
Not surprisingly, there is much reporting on the Civil War as well, with some of the closing battles of the war which would end in about 5 months.
Eight pages in nice condition.