Home > Back to Search Results > On the Stamp Act and the crisis in America...
Click image to enlarge 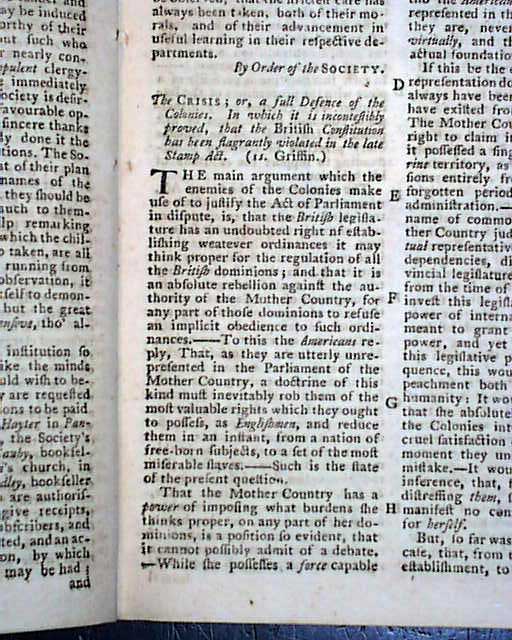 On the Stamp Act and the crisis in America...

Item # 667204 THE GENTLEMAN'S MAGAZINE, London, January, 1766  A significant article in this issue includes: "The Crisis; or a full Defense of the Colonies..." which begins: "The main argument which the enemies of the Colonies make use of to justify the Act of Parliament in dispute, is, that the British legislature has an undoubted right of establishing whatever ordinances it may think proper for the regulation of all the British dominions....the Americans reply that as they are utterly unrepresented in the Parliament of the Mother Country...rob(s) them of the most valuable rights which they ought to possess..." with much more. This article takes close to three pages and has some terrific content.
Also of interest is: "Governor Barnard's Reply to the Answer made to his late Speech by the Council and House of Representatives of Boston in New England", taking close to two pages and signed by him in type: Fran. Barnard. Another article within this issue is: "Proposals for a Female Government".
A short item notes that: "Canada, Nova Scotia, and the two Florida's military government, have submitted to the stamp act without opposition; all the rest have absolutely rejected the stamps."
Near the back is the "Historical Chronicle" with various news reports of the day, including a brief item noting: "...from Sir Henry Moore, Governor of New York, which it is said brought advice that all was quiet in the colonies.". There is also some reports under the heading: "American News" which includes: "In Nova Scotia they have burnt the stamp act, but use the stamps." and "In North Carolina the effigy of a stamp master was suspended on the gallows and many bitter healths drank by the populace..."  with other items as well.
All three plates called for are present, including the emblematic design on the gold box, a view of the Duke of Bridgewater's aqueduct, and the map of his Grace's new navigation.
Complete in 48 pages, 5 by 8 inches with full title/contents page featuring an engraving of St. John's Gate, very nice condition.