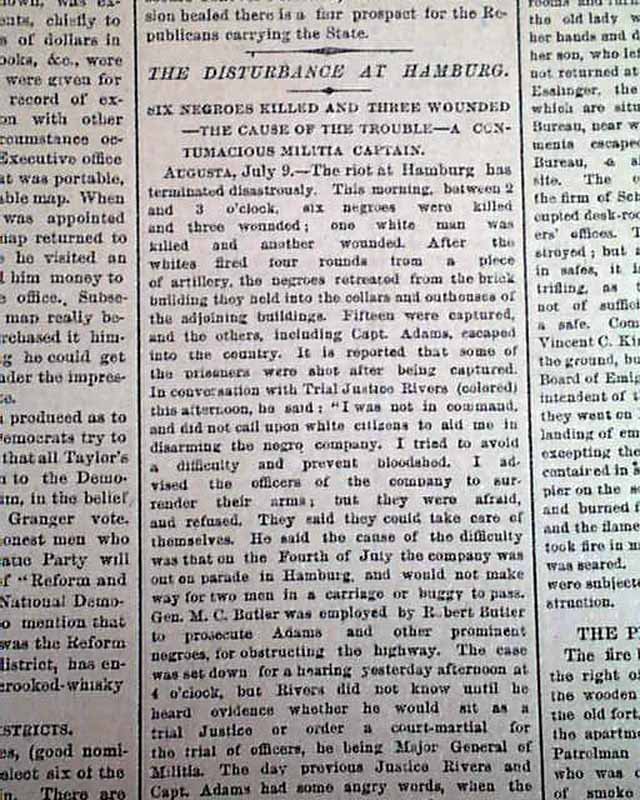 The front page has: "The Missouri Railroad Robbers" with subheads: "Bodies of Men in Pursuit of the Outlaws--Their Capture Hourly Expected--The Adams Express Company's Loss" with some details, and closing with: "...There is reason to believe that the notorious Missouri bandits, the James and Younger boys, were engaged in the robbery." History would prove them correct as Jesse & Frank James, and Cole, Bob & Jim Younger, among others, robbed the Missouri Pacific Railroad on July 7.
The front page also has a report of a revolt among African-Americans in Georgia, headed: "The Disturbance at Hamburg" "Six Negroes Killed & Three Wounded--The Cause of the Trouble...".
Page 5 has: "Sitting Bull & The Sioux" "Personal Sketch of the Savage Chief--Peculiarities of Tribe When on the War Path--Conversation with a Former Agent's Clerk" (see).
Complete in 8 pages, browning at the margins, some margin tears, generally nice. Some fragility so it must be handled carefully.