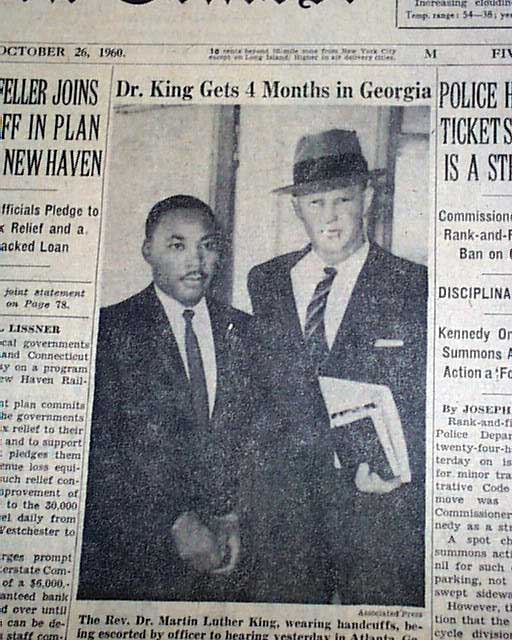 The top of front page has a two column photo of Martin Luther King Jr. wearing handcuffs with heading: "Dr. King Gets 4 Months in Georgia" (see)

source: "The King Legacy": On January 20, MLK moves to Atlanta and becomes co-pastor, with his father, at the Ebenezer Baptist Church. Lunch counter sit-ins begin on February 1 in Greensboro, North Carolina. The Student Nonviolent Coordinating Committee is founded on April 15 to coordinate student protests at Shaw University in Raleigh, North Carolina, and elsewhere. MLK is the keynote speaker at the event. In Atlanta, on October 19, MLK is arrested during a sit-in while waiting to be served at a restaurant. He is sentenced to four months in jail, but after intervention by then presidential candidate John Kennedy and his brother Robert Kennedy, MLK is released.

Complete with all 68 pages, light toning and minor wear along the central fold, generally nice.