Home > Prelude to the creation of the Jewish state...
Click image to enlarge 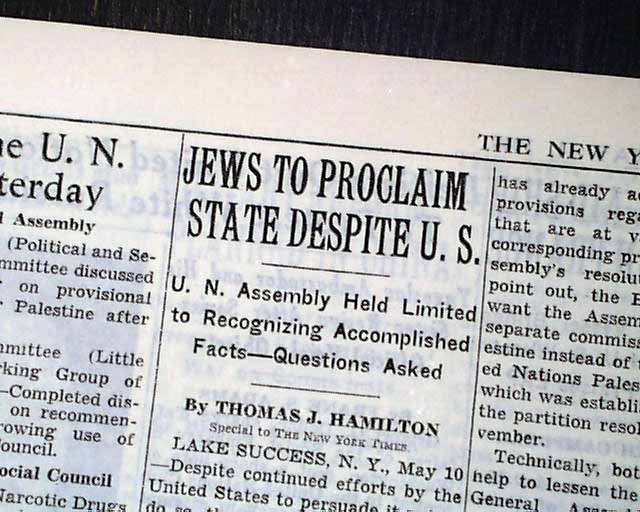 Prelude to the creation of the Jewish state...

The top of page 19 contains an early report concerning the soon-to-be-announced statehood for Israel, headed: "Jews to Proclaim State Despite U.S." with subhead: "U.N. Assembly Held Limited to Recognizing Accomplished Facts--Questions Asked" and begins: "Despite continued efforts by the United States to persuade it not to do so, the Jewish Agency for Palestine intends to proclaim a Jewish state in Palestine as soon as the British mandate is terminated..." and that would happen just 3 days later on the 14th when the proclaimed the Israeli Declaration of Independence. This was actually the day before the British mandate would expire.
The article is quite lengthy and is followed by a more brief article: "Recognition of Jews In Palestine Is Urged" (see photos).
Complete in 52 pages, rag edition in very nice condition.