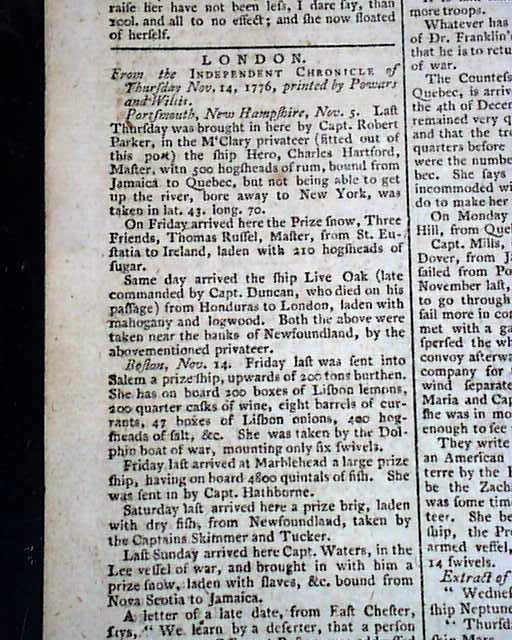 
THE LONDON CHRONICLE, England, Jan. 16, 1777  Page 2 has a items concerning an officer at Boston addressing General Howe upon his retreat from the heights of Boston. And a short note from Ticonderoga, followed by a report from New York noting: "...General Howe has wrote for more troops...Whatever has been the success, or the object of Dr. Franklin's mission to France, it is said that he is to return to America...".
Also a terrific address from Congress to rally the troops reads in part: "The salvation of America, under God, depends upon the activity & resolution of our troops. Vigilant officers & brave soldiers are invincible Let no thought of being conquered enter your hearts...Distinguish yourselves as heroes in this critical moment. Discover the soldier in every particular, and victory is ours."
An inside page has some news concerning events relating to the war, including: "...a gentleman is arrived from Paris with letters from Dr. Franklin directed to Lord George Germaine...it is also reported that proposals of a reconciliation are the object of these dispatches." Another item tells of the harsh treatment of Gen. Prescot in jail: "...from the unwholesomeness of this situation & other hardships the wounds he had received in former services broke out afresh & reduced him to so low a state that his death seemed inevitable. Major Preston, who was also a prisoner, went to Hancock, the president of the Congress...this severe treatment the Congress declared was intended as a retaliation for the imprisonment of Ethan Allen, which though really done by Gen. Carleton's orders, they ascribed to Gen. Prescot..." with more. Also a war-related report from: "Major Gen. Massey commanding his Majesty's Troops in the Province of Nova Scotia".
Eight pages, 8 1/2 by 11 inches, very nice, clean condition.