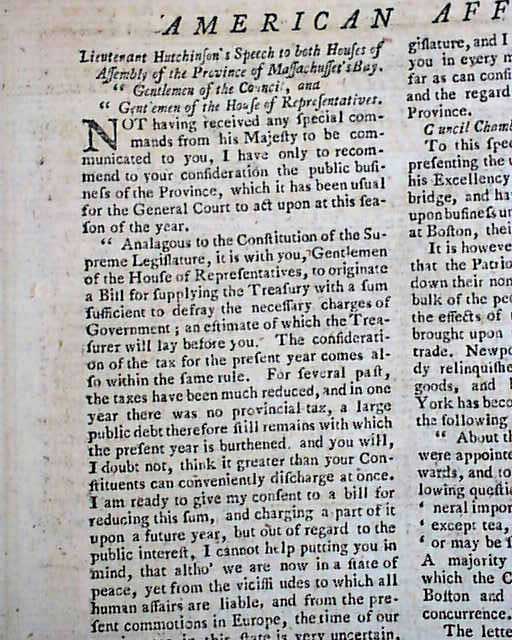 Item # 666348 THE GENTLEMAN'S MAGAZINE, London, July, 1770  The reverse of the title page is entirely taken up with: "American Affairs" which is mostly taken up with: "Lieutenant Hutchinson's Speech to Both Houses of Assembly of the Province of Massachusetts' Bay". In it he deals with the taxation issue (see). This is followed by comments on the response from the Mass. Assembly which deals with the non-importation agreement, a part of which includes: "...the greatest difficulty that the Patriots in that country can force down their non-importation scheme upon the bulk of the people who already begin to feel the effects of their obstinacy...Newport in Rhode Island has already relinquished the confederacy, imported goods...to each inhabitant propose the following question--'Do you approve of a general importation of goods from Gr. Britain except tea...A majority appeared for importation..." with much more.
Still present is the foldout map called for titled: "An Accurate Map of the Seat of War in the Mediterranean including the Morea & Archipelago" which is accompanied by a nice article on the war there. This is a map of present-day Greece  & the vicinity, folding out to measure 8 1/2 by 9 1/4 inches and is in very nice condition.
Also inside is: "Letter sent by a committee of the Supporters of the Bill of Rights to the Hon. the Commons House of Assembly of South Carolina". Many other articles as well.
Complete in 66 pages, 5 by 8 inches, full title/contents page with an engraving of St. John's Gate, very nice condition.
The foldout map noted is the only plate called for in this issue.