Home > Back to Search Results > Great map of North America, result of the French & Indian War...
Click image to enlarge 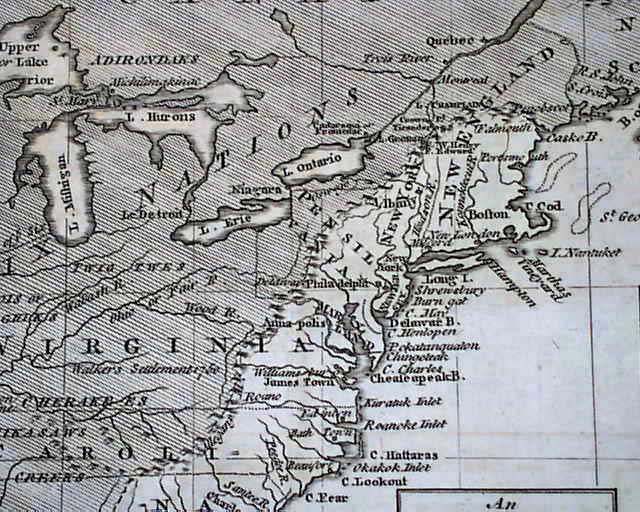 
SUPPLEMENT TO THE GENTLEMAN'S MAGAZINE For The Year 1762

This "Supplement" issue was printed at the end of the year, which has as its lead article a nice report titled: "General Observations on the Preliminaries of Peace, so far as they Relate to the Continent of North America..." which references the terrific map which comes with this issue. This article takes about 1 1/2 columns.
The map has always been among my favorites of the many which appeared in Gentleman's Magazine from the 18th century. It is titled: "An Accurate Map of the British Empire in Nth. America as Settled by the Preliminaries in 1762." referring to the Treaty of Fontainebleau which would lead to the Treaty of Paris in 1763 which would end the French & Indian War. There is an inset to the map which is labeled: "A Chart of the Entrance of the Mississippi." showing the New Orleans vicinity. The map measures 9 1/2 by 11 1/4 inches including the margins, has some foxing and a bit of ink bleed-through to portions, generally in good condition.
There are other articles in this issue as well as seen in the Table of Contents on the front page but they pale in comparison to the map and related article on the end of the French & Indian War.
Complete in 32 pages, 5 by 8 inches, half titlepage on the front, nice condition.