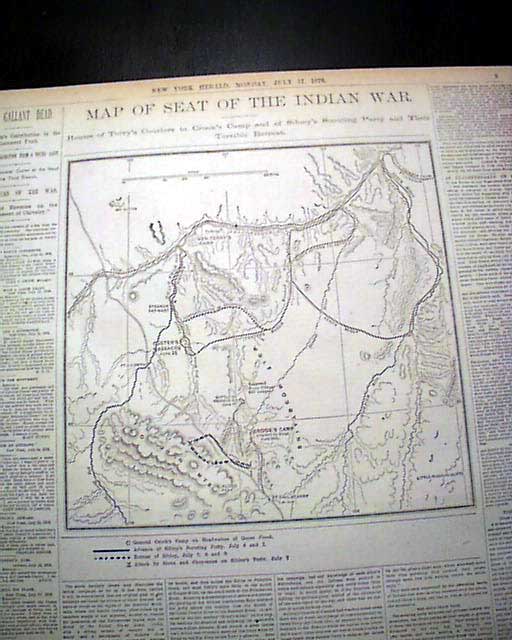 NEW YORK HERALD, July 17, 1876  The entirety of pages 1 & 2 are taken up with ads so the newsy portion of this newspaper begins on page 3.
And what a terrific first page of news as the first column has headlines: "THE GALLANT DEAD" "The People's Contribution to the Monument Fund" "Sketch of General Custer at the Head of the Third Division" "Reminiscences of the War" "Friends & "Enemies on the 'Embodiment of Chivalry.' " with a large number of subheads throughout the page, including: "Custer During The War" "and "Sibley's Scout" "They Marched all Night" "The Sioux Chase Them" "Custer's Fatal March" "Gibbon's Movements" "A Volley of 50 Shots" "A Desperate Expedient" and much more. But certainly the prime feature of this page is the very large map headed: "MAP OF SEAT OF THE INDIAN WAR" "Route of Terry's Couriers to Crook's Camp and of Sibley's Scouting Party and Their Terrible Retreat" which shows much detail of the Little Big Horn area, including areas labeled: "Crook's Camp" "Custer's Massacre" "Supposed Sioux Village--800 Lodges" "Fort Phil Kearny" and more.
Essentially the entire page is taken up with items concerning Custer.
Complete in 8 pages and in very nice, clean condition with a minor bit of damp staining in an upper corner which does not cause any disfigurement.