Home > Back to Search Results > Struggling under the yoke of oppression...
Click image to enlarge 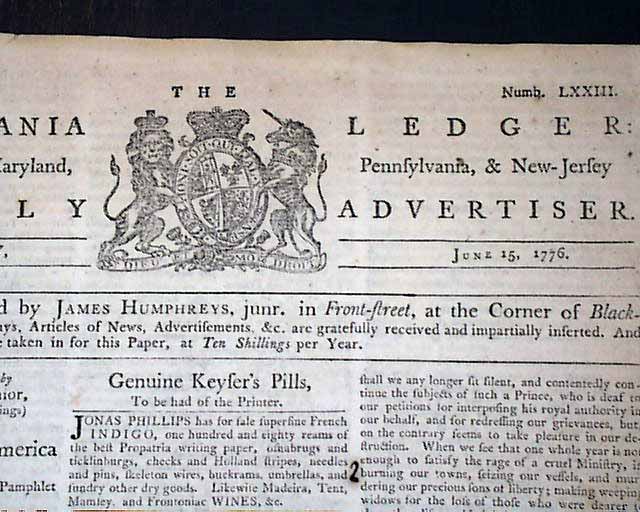 Struggling under the yoke of oppression...

This was a decidedly Tory newspaper, supportive of the British efforts in America. This newspaper ended publication in June, 1778 when the British evacuated the city. Keep in mind also that this issue is dated less than 3 weeks before the Declaration of Independence.
The front page begins with an advertisement for pamphlet of a Loyalist responding to Thomas Paine's Common Sense, titled: "The True Interest of America Impartially Stated In Certain Strictures on a Pamphlet entitled COMMON SENSE, By an American" with a bit more.
The ftpg. also has a great document, an appeal from the New York Mechanics  to the provincial congress, which includes: "We as a part of your constituents & devoted friends to our bleeding country...where fair freedom, civil & religious, we have long enjoyed...sorrow fills our hearts to behold her now struggling under the heavy load of oppression, tyranny and death...".
Page 2 has some good war-related content including: "The continent of America is to be allotted into 3 division: Adm. Shuldham is to command i the River St. Lawrence & to the northward; Lord Hoe from thence to North Carolina, and the 3rd division intended for Sir Hugh Palliser from North Carolina to the extent of our settlements." Also: "From General Lee's taking possession of New York it should seem as if the fate of that city was determined...". Also from New York: "Thurs. afternoon his Excellency General Washington arrived in town from Philadelphia." Also: "...that Lord Howe was to embark with the last of the forces...about 25,000 Hessians...This gives me some hopes of a reconciliation taking place, that we may live in quietness again...".
Freedom-focused content continues on pages 2 & 3. Page 4 has a nice & detailed advertisement taking three-quarters of a column, for the famous work: "A New System of MILITARY DISCIPLINE founded on Principle, by a General Officer."
Four pages, numeric notations in margins next to ads (this was the editor's copy), very nice condition.