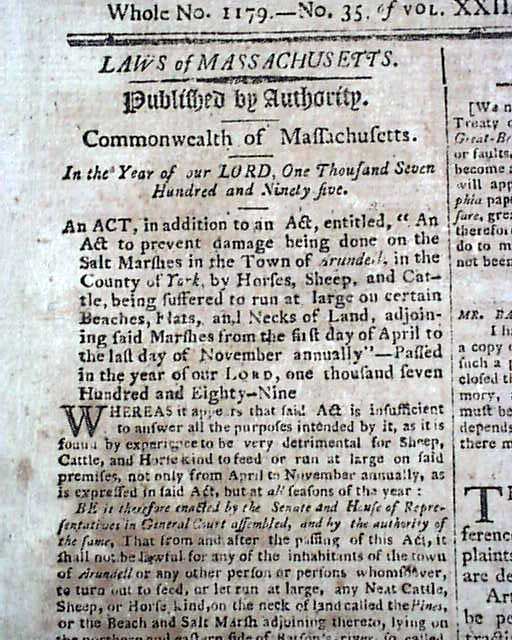 
COLUMBIAN CENTINEL, Boston, July 8, 1795  A very significant issue as the single sheet "Extraordinary" which is attached contains the full text of the Jay Treaty.
Jay's Treaty between the United States and Great Britain that averted war, resolved issues remaining since the treaty which ended the Revolutionary War, and facilitated ten years of peaceful trade between the United States and Britain in the midst of the French Revolutionary Wars, which began in 1792.
The Treaty was designed by Alexander Hamilton and supported by President George Washington. It angered France and bitterly divided Americans. Although Jay's Treaty provoked a storm of controversy (Jay was burned in effigy by mobs of outraged Americans), Washington successfully pressed for ratification.
To the last point, page 2 has: "Relative to the Treaty" which is discussion on the merits of the Jay Treaty.
Page 2 also has a report on the: "Masonic Celebration" on laying the cornerstone for the Mass. State House. And the front page has 3 Acts of the Mass. legislature, each signed in type: Samuel Adams.
Complete in 6 pages with the "Extraordinary", foxing throughout, otherwise in good condition.