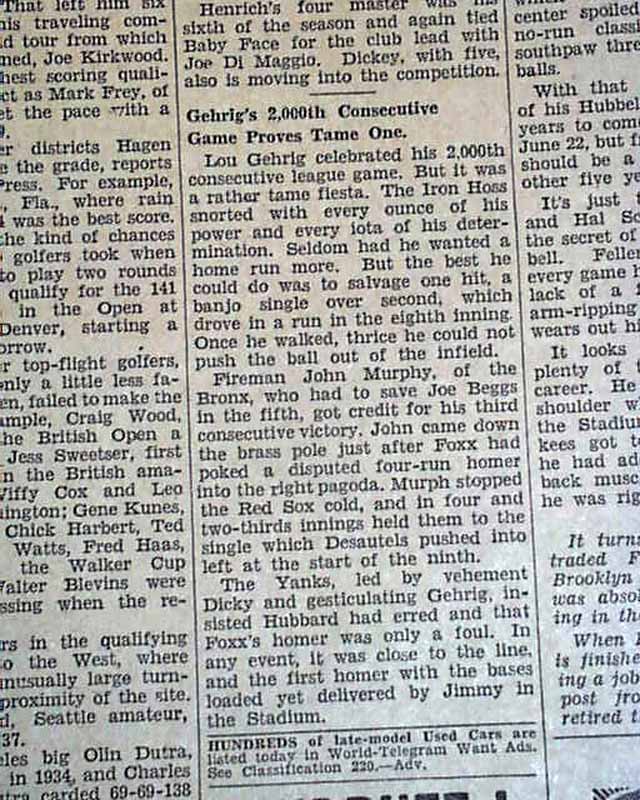 The top of the front page has a three column headline: "YANKS AND TIGERS IN DUEL" Coverage continues in the sport's section (page 31) small a small one column heading: "Gehrig's 2,000th Consecutive Game Proves a Tame One" (see) First report coverage on the 2,000th game milestone achieved by Yankee great Lou Gehrig. He would end up playing in 2,130 straight games before ending his career due to illness. Nice to have in the NYC publication, rare a such.
Complete with all 42 pages, light toning and minor wear at the margins, more so along the spine with small binding holes, generally in good condition.

wikipedia notes: Henry Louis "Lou" Gehrig (June 19, 1903 – June 2, 1941) was an American baseball player in the 1920s and 1930s, chiefly remembered for his prowess as a hitter, his consecutive games-played record and its subsequent longevity, and the pathos of his farewell from baseball at age 36, when he was stricken with a fatal neurological disease. Popularly called "The Iron Horse" for his durability, Gehrig set several major league records. He holds the record for most career grand slams (23).

A native of New York City, he played for the New York Yankees until his career was cut short by amyotrophic lateral sclerosis (ALS), now commonly known in the United States and Canada as Lou Gehrig's disease.[5] Over a fifteen-season span from 1925 through 1939, he played in 2,130 consecutive games, the streak ending only when Gehrig became disabled by the fatal neuromuscular disease that claimed his life two years later. His streak, long considered one of baseball's few unbreakable records, stood for 56 years, until finally broken by Cal Ripken, Jr., of the Baltimore Orioles on September 6, 1995.