Home > Back to Search Results > The Floyd Collins cave incident which became a national media event...
Click image to enlarge 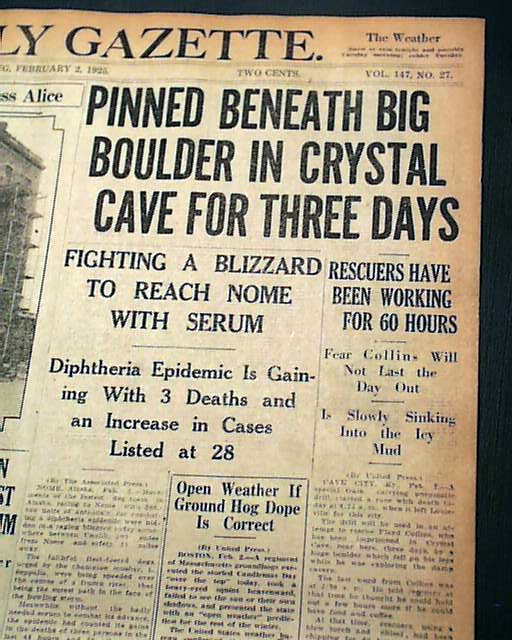 
TAUNTON DAILY GAZETTE, Massachusetts  A lot of four issues dealing with the Floyd Collins cave incident. Dates are Feb. 2, 16, 17, and 18, 1925.
Collins became trapped in a narrow crawlway, 55 feet below ground. The rescue operation to save Collins became a national newspaper sensation and one of the first major news stories to be reported using the new technology of broadcast radio. The rescue attempt grew to become the third-biggest media event between the world wars.
After four days, during which time rescuers were able to bring water and food to Collins, a rock collapse in the cave closed the entrance passageway, stranding him in the cave, except for voice contact, for more than two weeks. Collins died of thirst and hunger compounded by exposure through hypothermia after being isolated for 14 days, just three days before a rescue shaft reached his position. Collins' body would be recovered two months later.
Each issue has front page reports on the progress of the Collins rescue, as shown in the photos. Each issue is complete in 12 pages, irregular & partially loose at the spine from disbinding, otherwise nice condition.